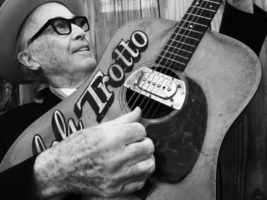 Multi-instrumentalist—and slide guitar master—Ry Cooder has premiered a new song, “Shrinking Man,” and you can hear it below. The track is from Cooder’s upcoming album, The Prodigal Son, which will be released May 11 via Fantasy Records. It’ll be his first new solo release in six years.

The album’s 11 tracks, including three Cooder originals and covers of his favorite spirituals from the past century, share a particular resonance in this time and place, forming an unflinching look at the state of play in modern America.

“I do connect the political/economic dimensions with the inner life of people, since people are at risk and oppressed on all sides in our world today,” Cooder said in a press release. “There’s some kind of reverence mood that takes hold when you play and sing these songs. ‘Reverence’ is a word I heard my granddaughter’s nursery school teacher use, a Kashmiri woman. She said, ‘We don’t want to teach religion, but instill reverence.’ I thought that was a good word for the feeling of this music.”

The album was recorded in Hollywood and produced by Ry and his chief collaborator, drummer Joachim Cooder (Ry’s son).

Cooder will be hitting the road in early June, and you can see all his current tour dates—and the track listing for the new album—below.