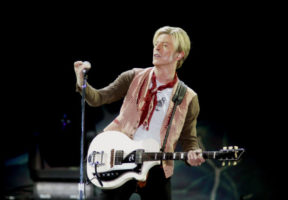 A few years ago, the gang at Reverb put together a cool list called “It’s All Relative: Five Great Out-of-Tune Recordings.” That story, which you can check out here, pinpointed five recordings that feature instruments not tuned to concert pitch—A/440Hz—and/or not simply tuned down a half step in the style of Jimi Hendrix, SRV, etc.

Today, however, we’re offering up a selection of tunes featuring instruments that aren’t quite in tune with each other. Or, to put it another way, your band has 16 strings (two six-string guitars and a four-string bass), but at least one of those strings is in its own world and isn’t playing nicely with the other 15.

Remember, we’re not knocking these tunes—we love all of them. In fact, the out-of-tune guitars and basses add a touch of charm to the recordings, some of which are hands-down classics.

If you have out-of-tune choices of your own, feel free to add them to the comments section below. We’re not opposed to making this into a “top 10″—or a “top 37,” for that matter. Enjoy!

P.S.: This idea for list was actually inspired by the flat bass on Bob Marley’s “Stir It Up,” but Guitar World‘s resident music expert and master transcriber Jimmy Brown—whose opinion I respect very much—assures me that the flatness of the low A note is “just within the acceptable range.” I’ll—begrudgingly!—take his word for it, but I consider it an “honorable mention.”

The Kinks, “Nothin’ in the World Can Stop Me Worryin’ ‘Bout That Girl”This moody tune from 1965—which also appears on the excellent soundtrack to Wes Anderson’s excellent 1998 film, Rushmore—is just fine until the bass enters the scene (right around the :30 mark). But if you really want to immerse yourself in offending notes, head right to 1:37 and just keep listening. It’s almost as if the bass gets further away from “acceptable” as the song goes on. The flatness isn’t really noticeable during the main, single-note riff, but you definitely hear it on the chords. (P.S.: This recording has driven me crazy for years.)

Equally noteworthy is the unsteady, “elastic” percussion hits, which waver from the “two and four” backbeat, most noticeably at :57, and at 1:12, where drummer Mick Avory momentarily pauses then “turns the time around” by hitting on beats one and three.

The Rolling Stones, “It’s the Singer Not the Song”There’s not much to say about this one, which also was recorded in 1965. It’s almost as if everyone except drummer Charlie Watts and singer Mick Jagger is old-school out of tune (Therefore, it’s the song, not the singer!). You really hear it during the acoustic guitar solo, which starts at 1:08. That said, this is one of my favorite early Stones tracks.

David Bowie, “Suffragette City”The bass is out. The flatness is most noticeable on the ringing A5 power chords—but you can hear it clearly from :05 onwards.

Bob Dylan, “Queen Jane Approximately”Someone must’ve gotten their guitar (and a few other instruments) “approximately” in tune the day this classic Highway 61 Revisited track was recorded. This one also happens to be from 1965. Maybe musicians were too busy doing “other things” that year… Note that the official studio version can’t be embedded below, but you can hear it here. Below, we’ve included Take 6.

David Bowie, “Ziggy Stardust”Yes, it’s Bowie and his crew again—specifically the electric rhythm guitar in the right channel of the stereo mix (below). It’s most noticeable during the intro riff.

Jimi Hendrix, “Who Knows” (from Band of Gypsys)This one comes to you courtesy of Guitar World music editor Jimmy Brown: “Granted, it’s a recording of a live performance, so it’s excusable, but it’s worth mentioning that at least one of Jimi’s strings (definitely the D) becomes noticeably flat from all his impassioned string-bending and whammy-bar antics in his first solo. You only really notice it when he reprises the song’s main single-note guitar riff at 3:23. Interestingly, you can hear how he quickly realizes it and ‘plays around’ the out-of-tune string by avoiding chords and opting to play mostly bent notes after that.”