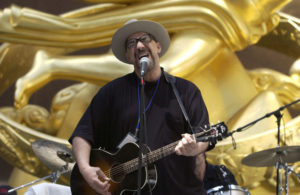 Pat DiNizio, lead singer and rhythm guitarist for New Jersey-based rock band the Smithereens, died Tuesday. He was 62. The band announced the news through social media this morning, although a cause of death was not provided.

“It is with great sadness that we announce the passing of Pat DiNizio, lead singer and songwriter of the influential New Jersey rock band, the Smithereens, America’s Band. Pat was looking forward to getting back on the road and seeing his many fans and friends. Please keep Pat in your thoughts and prayers.”

Variery reports that DiNizio had been plagued by health problems in recent years; he apparently lost the use of his right hand in 2015 and incurred nerve damage following a pair of falls. The Smithereens had to cancel three tour dates earlier this year after DiNizio injured his back and neck in another fall.

The band, which was formed in Carteret, New Jersey, in 1980, enjoyed a string of Sixties-influenced hits in the Eighties and early Nineties, including “A Girl Like You,” “Blood and Roses,” “Strangers When We Meet,” “Behind the Wall of Sleep,” “In a Lonely Place” and “Only a Memory.”

Although the Smithereens hit the big time, DiNizio continued to live in New Jersey; in fact, he became a familiar face on the state’s local music scene, often turning up at clubs and performing Beatles tunes at the annual Fest for Beatles Fans in East Rutherford, New Jersey.

“It beats picking up garbage, like I used to do,” DiNizio told the Los Angeles Times in 1990, when talking about the band’s success. “We’re self-employed—beyond the fact that we get to do what we love for living.”

The band’s last studio album, 2011 (released that year), made visual and sonic references to 11, the band’s successful 1989 album.

“In October 2010, the Smithereens reunited with producer Don Dixon to record our latest album, 2011,” Smithereens lead guitarist Jim Babjak told Guitar World in 2012. “It had been 16 years since we last worked with him on our 1994 RCA album, A Date with the Smithereens. We traveled down to North Carolina and recorded the basic tracks for 2011 at Mitch Easter’s Fidelitorium studio.

“I was told he had some vintage equipment I could use, so all I brought with me was my ’52 reissue Telecaster. I played through something called a Carr Mercury amplifier. I’d never heard of it before, but I liked the sound, so I went with it for most of the basic tracks.

“All the overdubs were done in [singer/guitarist] Pat [DiNizio]’s living room in January at his New Jersey home. I would come in at night and play through an amp simulator that Don Dixon had made himself. Pat’s mom was sleeping in the next room, so I only heard myself through headphones. Pat used a Robert Johnson Gibson acoustic on the rhythm track, and I used the Telecaster throughout.

“I’m proud to say that ‘Sorry’ was included in Little Steven’s Underground Garage’s Top 10 as the coolest song of the year for 2011.”

Other recent Smithereens albums include two collections of Beatles covers—Meet the Smithereens! (2007) and B-Sides the Beatles (2008)—and a tribute to the Who’s Tommy, 2009’s The Smithereens Play Tommy.