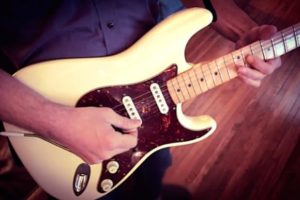 One signature musical element I often rely on when writing music for Revocation is the use of shifting meters, or time signatures.

I love the sound of a primary riff that is built from sudden and unexpected rhythmic shifts, such as alternating between 4/4 and 7/8 or moving from 7/4 to 6/4 to 4/4. When I’m incorporating odd meters into a song, I have the freedom to imagine a given phrase in different rhythmic patterns: for example, a shift from 7/4 to 6/4 could just as easily be conceived as 4/4 to 3/4 to 4/4 to 2/4. This is exactly the case with the song “Profanum Vulgus,” from the new Revocation album, Great Is Our Sin, which is the focus of this month’s column.

FIGURE 1 illustrates the song’s intro and primary riff, which is also played during the guitar solo section. I begin in 4/4 time, with an inherent rhythmic feel throughout three evenly spaced accents on each beat, expressed as eighth-note triplets. Throughout bar 1 and across beats one and two of bar 2, I move alternately between the low C root note and the full Cm(maj7) chord. Notice that the chord is accented in different rhythmic patterns on each beat, which lends an intriguing sense of musical ambiguity to the phrase.

At the end of bar 2, I move down a minor third, to Am(maj7), but then on the first beat of the next bar, I immediate move the root note of the chord down a half step, changing the chord to Ab. Bar 4 features a shift to 2/4 meter, and here I bring the open G string into play, sounding an Abmaj7 chord. These types of seventh chords are not usually found in metal and thrash music, which, for me, represents part of the attraction. In fact, at the very end of the phrase, I bring in a dominant seven sound, with the use of Ab7. Dominant seven chords are very common in blues and rock, but are rarely heard in metal.

With all of these unusual and shifting rhythmic accents, I recommend first playing through the phrase slowly and carefully, counting as you go. Once the pattern is rock-solid in your head, you’ll have the freedom to lean into it with the power and speed necessary to make it musically compelling and effective.

FIGURE 2 shows the solo I play over this same riff, and for the majority of the solo I rely on the C Aeolian mode (C D Eb F G Ab Bb), with an emphasis on C minor pentatonic (C Eb F G Bb) and the C blues scale, which adds the flatted fifth, Gb, to C minor pentatonic. For this particular solo, I chose to “float” over some of the odd meter shifts, with held and tied notes, as this gives the solo a feeling for freedom as it develops. I also use a “surrounding note figure” technique in bars 13, 14 and 16, as I will play the “home” note on the downbeat and then hammer-on to the note one half step above it, then use a double pull-off to the note one half step below it before returning to the initial note.