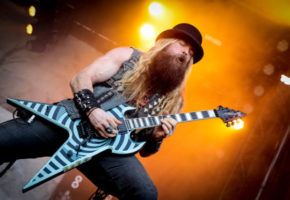 I’m going to focus on manipulating economy picking for the powerful execution of rapid-fire arpeggios. To get a grasp of the fundamental properties of these economy picked arpeggios, Example 1 depicts the three basic forms of simple two-string, root-3rd-5th arpeggios found in any common minor or major key (Minor, Major and Minor flat 5). For the sake of this lesson, we’ll stay in the key of Am.

The aggressive fluidity of economy picking is a valuable technique in any guitarist’s repertoire, providing the means for maximized speed with minimal effort.

There are myriad applications of this close relative of sweep picking, most notably the three-note-per-string scalar patterns described in Frank Gambale’s Monster Licks and Speed Picking and used by countless jazz, fusion, country, rock and metal players.

But this time around, I’m going to focus on manipulating economy picking for the powerful execution of rapid-fire arpeggios. To get a grasp of the fundamental properties of these economy picked arpeggios, EXAMPLE 1depicts the three basic forms of simple two-string, root-3rd-5th arpeggios found in any common minor or major key (minor, major and minor flat 5). For the sake of this lesson, we’ll stay in the key of Am (A,B,C,D,E,F,G).

For a split second, rest the pick on the next string and as you remove the finger from the previous note, continue to push through the next note. This should be all in one fluid downward motion, slicing through the friction presented by the strings. Focus on getting an articulate snap of the strings and complete the motion with an upstroke on the third note of the pattern. Repeated properly and with rhythmic evenness, the overall action should feel like a broad alternate pick stroke.

Try a little bit of a palm mute to emphasize the individuality of the notes and accentuate the flowing percussiveness of the pick stroke. Check out the beginning of Zakk Wylde’s solo on Ozzy Osbourne’s “Miracle Man” below to hear this style of economy picking in action (Zakk plays these as syncopated 16th notes as opposed to triplets).

Similar to the economy picked licks of Marty Friedman, the phrasing of the arpeggios in EXAMPLES 2A, 2B and 2C adds a pull-off to the end of the previous examples and ups the speed quotient with an absolute minimum of added effort. Keep the duration of all of the notes even and rhythmic, and don’t rush the pull-offs!

Kicking things up a notch by adding some alternate picking to the mix (as well as making things a little more harmonically interesting), EXAMPLE3 adds the 7th (the scale tone below the root note of each chord) to each of the above arpeggios. As such, EXAMPLE3A is an Am7, EXAMPLE3B is a C Maj7 and EXAMPLE3C is a Bm7(b5). Now that we’re using 7ths there is a fourth type of chord in the key, so EXAMPLE3D is the Dominant 7th chord found in the key of Am: G7. Be sure to emphasize the “swing” of your right hand wrist as you combine the alternate picking strokes with the economy picking sweep motion.

Continuing, the shapes in EXAMPLES 5A-5D add a slightly exotic flair to the proceedings with add9 arpeggios. Dealing with the “standard” shapes found in most keys, EXAMPLE5A is an Am add9 arpeggio and EXAMPLE5B is a Cadd9. The Bm(b5)addb9 arpeggio in EXAMPLE5C and the Em add b9 in EXAMPLE5D round out the other types of add9 shapes in Am, here emphasizing the two half-step scale relationships between B and C and E and F in the key. These shapes sound particularly cool due to the close proximity of the 9 to the 3rd in the arpeggios and can give your pinky quite a workout. Start slowly, pay attention to the evenness of your left hand articulation and feel the flow of your right-hand motion.

The previous examples have added more chord tones to the arpeggios on the B string, but EXAMPLES 6A-6D add the 11th to the mix and switch things up mechanically with the extra E string note. In these cases, the add11 note pulls off to the 3rd, adding an easy means of achieving even greater speed with simple means. The motion of the pick hand is switched up as well, and you’ll find that this set of examples will feel most similar to straight alternate picking at high speeds.

EXAMPLE 6A and EXAMPLE 6B are the basic minor add11 and major add11 (Am add11 and Cadd11, respectively), EXAMPLE 6C is the Bm(b5)add11 and EXAMPLE 6D rounds out the types of add11s in the key with the Lydian-flavored Fadd#11 arpeggio. As with the above examples, try varying the examples with different arpeggios in the key and with other scale types and fingerings (with one note on the B string and three notes on the E), using the examples as a template for your experiments. These sound particularly cool with wide stretch pentatonic and blues scale fingerings!

Finally, EXAMPLE 7 is a short etude following an A harmonic minor (A,B,C,D,E,F,G#) progression: Am-Bmb5-G-Am-F-G-E7-E7 (E7b9 in this case—a G#Dim7 chord superimposed over E). I’ve used the add9 forms here to give the maximum left hand workout and for an exotic flair in the harmony, but be sure to try the same progression with the other types of arpeggios found in the previous examples. Note that for the final two bars I’ve expanded the picking to include full-on three-string sweep picking, thus increasing the challenge of maintaining pick control by combining alternate, economy, and sweep picking in the piece. Note that you’ll start the whole etude on an upstroke to maintain the continuity of the picking on subsequent repeats.

I’ve only scratched the surface here with what is possible with the utilization of economy picking, but these examples should serve as a great primer for those unfamiliar with the technique as well as being excellent refinement exercises for experienced players who may not use the skill very often.

As always, use the above examples to get comfortable with the technique, get creative with your own variations and look to seamlessly integrate them into your own individual style. Happy shredding!

Scott Marano has dedicated his life to the study of the guitar, honing his chops at the Berklee College of Music under the tutelage of Jon Finn and Joe Stump and working as an accomplished guitarist, performer, songwriter and in-demand instructor. In 2007, Scott developed the Guitar Strength program to inspire and provide accelerated education to guitarists of all ages and in all styles through state-of-the-art private guitar lessons in his home state of Rhode Island and globally via Skype. Learn more at GuitarStrength.com.