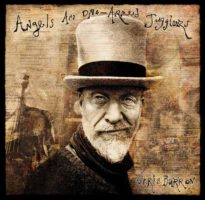 When he’s not fronting the Spin Doctors—one of the least-appreciated guitar bands of the past 25 years—Chris Barron often can be found working with the Canoes or adding to his ever-growing stockpile of songs in waiting.

“I have this gigantic backlog of eclectic songs that would never necessarily work for the Spin Doctors,” Barron told Billboard last month. “I wanted to make a solo record for a really long time, just as a creative outlet. So here it is.”

The “it” in Barron’s sentence is Angels and One-Armed Jugglers, his new solo album, which is slated for an October 20 release via Chrysanthemum Records. Today you can enjoy our exclusive premiere of the powerful and poignant “Too Young to Fade,” which closes out the 11-track album.

“This is a tune I wrote over the course of about 15 years about my childhood friend, Bobby Sheehan, best known as the bass player of Blues Traveler, the great brother band of the Spin Doctors,” Barron told us. “He was a mythical figure in my life, as close to Jack Kerouac’s depiction of Neal Cassidy as a flesh-and-blood human being could possibly be. A visceral, instinctive and accomplished musician, he also was deeply vulnerable, burying deep suffering beneath supreme confidence and the kind of seeming ‘luck’ workaholics often have.

“I started the song in some weird horn key, Eb or Bb—I don’t remember exactly). It came alive when I transposed it to my pet key of G major, which is a sweet spot for my voice. Then I could use those bar chords on the verses—boxy, descending, parallel inversions—and switch to the throaty, open-string root-position cords for the verses. The verses are written from Bobby’s point of view, through the filter of my imagination, of course.

“The inspired electric guitar on the track is played by my pal Andrew Carillo. I don’t remember exactly which configuration of guitars and amps he was using, but he had a Les Paul Custom and a Telecaster, and we had a little Ampeg Jet amplifier that sounded great, and my ol’ ’65 Fender Vibrolux kicking around, among other things.

“When he played those soaring runs on the chorus he wanted to redo it, but [producer] Roman Klun and I were like, ‘You’re nuts. Listen to this.’ They sounded so badass in the playback. We just stood there and laughed. Now sonically, it defines the tune.”

As for the album as a whole, Barron compares it to the tray of oysters “on a side table of the soirée they throw the evening before the comet hits the earth.”

“Thematically, it’s about the cocktail party at the apocalypse, the decline of the American empire and just a bunch of lemmings in neck-ties going over the edge,” he said in a press release released last week. “But it’s very personal, too, and there’s a lot of my own sadness in there. Anybody can see the world is a deeply unfair place. It’s the responsibility of the artist to give some kind of consolation. Yes, the world is fucked up, but there is still wonder, and there’s still a twist of comedy.”

Below, besides “Too Young to Fade,” we’ve included the album’s first single, “April and May,” below.

For more about Barron, including his upcoming tour dates and new-album info, visit thechrisbarron.com. To twist along with the Spin Doctors, visit spindoctors.com.