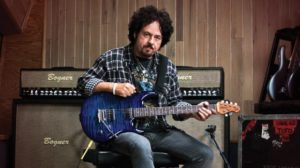 Steve Lukather on Weezer’s “Africa” Cover: “No One is Laughing Harder Than Me!”

Legendary guitarist and Toto member Steve Lukather recently sat down with Ernie Ball to share his thoughts on Weezer’s cover of the Toto anthem, “Africa.”

“No one is laughing harder than me! And nobody appreciates it more than all of us at Toto,” Lukather said. “But, on the other hand, this one is really hard to do. Harder than it sounds.” You can read the full interview here.

Recorded by the band after a months-long campaign by the fan account @WeezerAfrica, the cover became Weezer’s highest charting song since 2009, reaching No. 89 on the Billboard Hot 100.