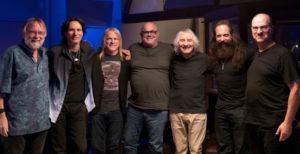 “The sound and earthiness of this ‘country-fusiony-jazz-esque’ record is phenomenal,” Vai says. “But perhaps the thing for me that’s most surprising about this record is how unique a [bass and guitar] player Sterling is. We express who we are through our instruments, and the way Sterling plays has a warmth in the tone and conscientiousness in the note choice that’s accessible and deeply pleasing.”

The album is essentially an ode to the music Ball grew up listening to and playing—and Vai, Petrucci, Morse and the rest of the pack where giddy to be involved. Lee’s fretwork can be heard on covers of Buck Owens’ “Crying Time” and Hank Williams’ “Hey Good Looking”; Morse plays on “The In Crowd,” the catchy Dobie Gray classic.

“I approached it as if we were playing a show together,” Morse says. “When John brings down the band with a certain type of snare hit, I tried to imagine us at a little club somewhere having a blast. This is a fun record, and we all got to hear the whole thing together, laughing and smiling the whole time.”

“That song was huge for me when I was 4, and it stuck,” Vai says. “My goal with the melody was to try and retain the innocence and charm of the original.”

Petrucci’s track—although seemingly out of the blue—perfectly sums up the album’s fun vibes. “Truth is, I wasn’t sure what tune to do,” the Dream Theater guitarist confesses. “The fact that Sterling was paying homage to music he grew up with and had special meaning to him, it was intimidating trying to pick a song. So, I was happy when Sterling—who knows I was a huge ‘Disnerd’—suggested playing a Disney song. We decided that a medley of tunes from a couple of 1940s animated Disney movies and some old-school Disneyland/Disney World theme-park songs would make for the ultimate guitar-powered walk down Main Street USA.”

The album was recorded at Gordon Rustvold’s Broken Prop Studio in Fountain Valley, California; produced by Ball, Ferraro and Cox and engineered by Bill Evans.

You can check out Vai’s contribution, “Sugar Shack,” above. To preorder the album, head here.