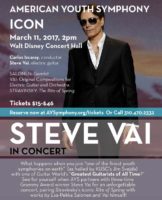 Steve Vai has announced a unique show that’ll take place 2 p.m. March 11 at Los Angeles’ Walt Disney Concert Hall. The event—which teams the guitarist with the highly respected American Youth Symphony and conductor Carlos Izcaray—will find Vai performing his own music fused with orchestral material. On either end of Vai’s performance, the audience will be treated to Igor Stravinsky’s The Rite of Spring—A Vai favorite—and works by Esa-Pekka Salonen.

6. AYS performs The Rite of Spring.