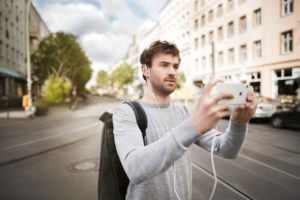 The allure of AMBEO: inside Sennheiser's binaural Smart Headset

Visually, Sennheiser’s newest headphone offering looks much like any other pair of earbuds, but the technology within offers so much more. The AMBEO Smart Headset allows users to make high-quality binaural recordings while taking video on their iPhone (an Android version is due later this year), while also offering active noise cancellation and a unique ‘transparent hearing’ feature.

The demo day began onboard a Routemaster bus near the London Eye with a listening session using the MobileConnect app, Sennheiser’s WiFi-based system for accessible hearing. MobileConnect is not limited to use with the AMBEO Smart Headset and is currently available for any iOS or Android phone. This was simply an opportunity to try the AMBEO Smart Headset on and play with its “situational awareness” features. There are two modes to choose from: noise cancellation and transparent hearing.

Transparent hearing allows users to adjust how much sound from the outside world blends into whatever they are listening to. It is both a comforting safety feature walking along a busy road, and a useful monitoring application when recording. Through the SmartHeadset app, users can choose between natural or amplified levels of environmental sound.

The real fun was in hopping out of the bus and heading to Piccadilly Circus: a crowded, noisy environment with traffic whizzing by from every direction, for a first taste of capturing binaural sound recordings. The final stop of the tour saw the all-around cacophony of Piccadilly Circus replaced by a much quieter courtyard with two musicians on acoustic guitars at either end. Walking between the two made it much easier to experience, and appreciate, the spatial information provided by the 3D audio.

The only real giveaway that these headphones can do more than deliver sound to your ears is the larger-than-usual remote. Here users have their traditional music playback controls with the addition of a recording status light, a situational awareness rocker switch and a user-programmable smart slider that can either quickly launch a favourite app, set recording levels (reduced or natural) or mute the telephone microphone.

The microphone capsules on the Smart Headset are housed quite discreetly inside each earpiece. The grille covering each omnidirectional capsule could easily be dismissed as a visual design feature, but offer a surprising degree of protection against wind noise. The ear hook design keeps the headphones quite stable during recording, eliminating body movement noise. The microphones can capture audio from 15-22,000 Hz and record at a maximum SPL of 112dB.

As with its other mobile phone microphones, Sennheiser’s SmartHeadset app has been developed using Apogee’s digital audio expertise. The headphones can also record binaural audio to Apple’s native Camera, Clips and iMovie as well as Apogee’s Meta Recorder, Filmic Pro (48k and 96k) and Twitter. Although you can use the AMBEO Smart Headset to record sound with most popular social media apps, they are limited to a mono input using the built-in mic.

Up until recently, most immersive audio recording systems (binaural included) have been beyond the financial reach of consumers, and for the most part, bulky. The AMBEO Smart Headset isn’t the first portable binaural recording product on the market, but it is the first truly mobile system that integrates seamlessly with a smartphone.

In fact, the AMBEO Smart Headset is so feature-rich it just about defies categorisation. The sound quality, noise cancellation and situational awareness features on their own make them ideal for just about anybody. The binaural sound recording feature would appeal to anyone with an interest in field recording, and its compact size, discreet profile and professional quality microphones could well see audio professionals adding a pair to their gear bags. Where these headphones will most likely take off is with VR and AR content creators, and anyone with an interest in pushing the boundaries of traditional media with mobile-specific productions – or at least headphone-specific ones.