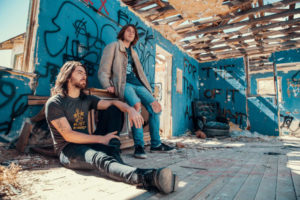 Today, Guitar World has teamed up with LA-based rockers the Dose—singer/guitarist Indio Downey and drummer Ralph Alexander—to premiere their new music video, “Vervain.” You can check out the clip, which was directed by Jake Stark, below. The song is from the duo’s upcoming debut album, which—according to most reports—is almost completed. The disc was produced by Keith Nelson (Buckcherry) and mixed by Joe Barresi (Queens of the Stone Age, Tool, Soundgarden). If “Vervain” is any indication, the album should offer a healthy dose—pun intended—of Nineties-inspired firepower.

“I remember the place where we shot it smelled like roses,” Downey tells us. “That’s odd because it looked like a bomb shelter and ironic because ‘a rose, a rose,’ is a lyric in the song.”

The Dose just came off a West Coast club tour and will be announcing summer shows very soon. This fall they’ll share the stage with Nine Inch Nails, Deftones, System of a Down and more at the Louder Than Life and Aftershock festivals. Keep an eye out for these guys.

“Vervain” is available now. For more about the Dose, check out thedoseband.com.