Chet Atkins made countless recordings as a studio musician, producer and solo artist. Many of his recordings—particularly those of the artists he produced in Nashville, like Elvis Presley, Roy Orbison and the Everly Brothers—laid the foundation for early rock and roll.

Though Atkins played many styles, he is most often associated with country music and acoustic guitars. By using a combination of thumbpick and fingers, Chet created his signature “fingerpicking” sound. This month, I’m going to look at two patented Chet Atkins techniques.

FIGURE 1 shows an approach Atkins often used when playing scales. With the fret hand near fourth position, ascend/descend A Mixolydian (A B C# D E F# G), grabbing each successive scale tone on a neighboring string and mixing in all available open notes.

It should sound similar to playing a scale on a harp, or on a piano with the sustain pedal held down. Keep your fret-hand fingers depressed as long as possible so that notes overlap, and follow the indicated picking/fingerstyle indications to get the full effect. This “harp trick” is common in the lines of country players like Albert Lee and Brent Mason, and can be done with any scale, provided the open strings are “in key.”

The last note of each chord in FIGURE 2 is a harp harmonic, another technique pioneered by Atkins (and later taken to new heights by Lenny Breau, Ted Greene and Tommy Emmanuel).

On beat four of each bar, you will see “H.H.” Touch a fretted string with the plucking-hand’s index finger precisely 12 frets higher than the note appearing parenthetically in tab, then pluck that string behind your index finger’s point of contact, using the thumb (or thumbpick) to produce a chiming “octave overtone” harmonic. The preceding notes of each chord are played using traditional fingerstyle technique (without harmonics). 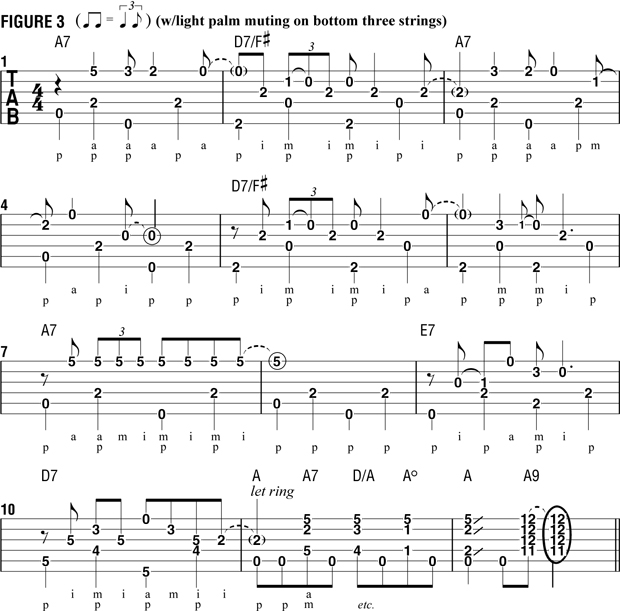 In FIGURE 3, a 12-bar blues in A, you’ll see this technique in action with a variety of A7, D7 and E7 shapes. Familiarize yourself with each chord voicing first, study the structure of each bass note pattern and practice repeatedly (while chord shapes are held down) until the bass line feels automatic. Then slowly add the melody notes, focusing on one bar at a time until you have it perfected.