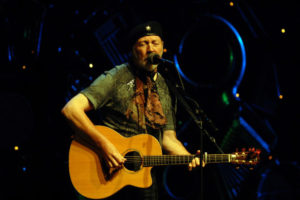 For an artist with such a vast body of work, Richard Thompson has spent much of his musical life under the radar. A founding member of Fairport Convention (he penned their anthem “Meet on the Ledge”) and the folk-rock duo Richard and Linda Thompson, he is also a critically acclaimed solo artist whose songs have been covered by numerous artists, including Robert Plant, Elvis Costello, David Byrne and R.E.M.

Thompson plays Martin, Lowden and Farrington acoustic guitars, and as we’ll see in this lesson, he favors hybrid picking (“pick-and-fingers” technique) and often opts for drop-D tuning (lower your sixth string’s pitch one whole step, to D). Today, with a career spanning almost 50 years, Thompson is still recording and touring, and is busier than ever. Let’s examine some of the things that make this picker tick.

After four influential years (1967–’71) with Fairport Convention, Thompson went solo, issuing Henry the Human Fly in 1972. The album featured Fairport vocalists Ashley
Hutchings and Sandy Denny, along with
Linda Peters, whom Thompson wed later that
year. As Richard and Linda Thompson, the
duo collaborated on a host of albums before
breaking up romantically and professionally
in 1982. Among their celebrated works is “The
Sun Never Shines on the Poor,” from 1975’s Hokey Pokey, which Thompson thumb-picks
on a drop-D acoustic capo-ed at the second
fret (we’ll forego the capo in this lesson),
similar to FIGURE 1.

FIGURE 2 is reminiscent of the couple’s “Dimming of the Day,” from
1975’s Pour Down Like Silver, a fan favorite
that has been covered by the likes of Bonnie
Raitt, David Gilmour and Alison Krauss &
Union Station. Thompson hybrid picks this drop-D gem, played with a capo at the first fret
on the studio release.

Starting in the late Eighties, Thompson’s
solo career blossomed with a string of
acclaimed releases for Capitol Records,
including Amnesia, Rumor and Sigh and
Mirror Blue. FIGURE 3 is informed by
“Beeswing,” from Mirror Blue. For full Celtic
effect, emphasize the speedy hammered-on/
pulled-off grace notes in bars 1 and 4.

In the new millennium, Thompson
moved away from major labels, opting for a
personal way to present his music. In 2005,
he self-funded the album Front Parlour
Ballads. Recorded in his garage on his laptop
computer, this intimate album excelled on the indie charts, owing much to unique guitar vocal
pieces like “How Does Your Garden
Grow?” which inspires FIGURE 4.
Thompson continues to release albums
of new, original music. He’s also responsible
for 1000 Years of Popular Music, a “covers”
collection of tunes dating back as far as the title
suggests. Among its offerings is his version of
the Britney Spears hit “Oops!…I Did It Again,”
into which Thompson injects a medieval flavored
instrumental interlude, similar to
FIGURE 5.