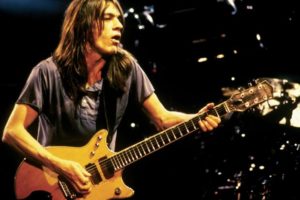 The Secrets Behind Malcolm Young's Guitar Sound on AC/DC's "Thunderstruck"

Finding out what gear guitarists use isn’t a problem. Most players will gladly recite a list of their favorite guitars and equipment when asked, especially if they have signature model products. If they won’t, there’s usually a good chance that somebody somewhere has at least snapped a photo or two of their guitars and live rigs.

The bigger challenge is finding out how most guitarists use their gear. It’s not the fault of guitar journalists or the artists themselves—cataloging every single guitar played and amp or effect setting used can be a tedious, laborious, time-intensive affair, and many guitarists can’t remember all of the details (that’s why they pay their guitar techs big bucks). I personally can’t remember every knob on certain amps I own, let alone what my exact favorite settings are.

To help you figure out how to create the guitar tones of several iconic songs, we’ve dug deep into research mode, combing old interviews and meticulously examining stage and studio photos from the appropriate eras. I then dug into my personal gear collection of over 100 guitars, 75 amps and 400 pedals and rack processors to replicate those sounds. If I didn’t have particular pieces of gear, I used items like Fractal Audio’s Axe-Fx II XL+ and AX8 (extremely helpful), a Line 6 POD HD500X and various iPad apps, including Positive Grid’s Bias Series and IK Multimedia’s AmpliTube Series.

Much of the original gear used to record these songs is well known, and as a result many of these items are very expensive, if you can even find them. For those of you with limited funds, we’ve also put together more affordable alternative rigs that should provide most of the core elements of these tones. If you want it all, the most affordable alternative may actually be Fractal’s AX8 and a great guitar or two of your personal preference.

Because control markings and layout styles are inconsistent, I’ve listed all settings from 0–10 where 0 is completely off, 10 is all the way up and 5 is exactly in the middle. Keep in mind that the sound of even the same guitars and amp models can often vary dramatically, especially with vintage gear more than 30 years old. If the recommended settings don’t sound quite right, tweak them as you see fit. These settings worked best with my rigs and should get you very close, but variables such as a guitar’s tone woods and pickups can make a difference. Pedals are listed in the order that they should be chained together in series from the guitar to the amp.

Also keep in mind that all of the examples are studio recordings, so the sounds may not be ideal for live performance. Other important elements like the mics, outboard gear and mixing console settings used in the studio while tracking, mixing and mastering can affect the overall tone, so these sounds may not completely match the final product you hear on a record. However, we hope you’ll find that our settings get you most of the way there and inspire you to come up with your own signature sounds to influence new generations.

Arguments about the best guitarists are highly subjective, but when it comes to choosing the best hard rock rhythm guitarist of all time, there really is no question that this distinction belongs exclusively to Malcolm Young. Although Malcolm’s tone was relatively consistent over the years, during AC/DC’s classic 1978–80 period spanning the Powerage through Back in Black albums, his tone was slightly more distorted and darker (allegedly due to his use of Marshall 2203 100-watt master volume heads).

Before and after that he mainly relied on Marshall Super Bass heads in the studio, which defined his signature rhythm tone heard on songs like “Dirty Deeds,” “Let There Be Rock,” “For Those About to Rock” and “Thunderstruck.” Basically, the amp is dialed in clean but as loud as possible to ride on the razor’s edge of power amp distortion and deliver the ideal combination of grind, twang, clang and crunch, with no distorted preamp “hair,” fizz or compression.

For “Thunderstruck,” Malcolm’s guitar was his trademark Gretsch Jet Firebird with a single vintage Filter’tron humbucker at the bridge and a Badass wraparound bridge (he returned to the original Gretsch roller bridge and Burns tailpiece with the strings extending to the tailblock a few years later). Extra-heavy strings (.012–.058) combined with the Jet Firebird’s chambered body provided generous resonance to produce a distinctive midrange honk, further embellished by turning the amp’s bass control way down low, which also leaves sonic space to allow the bass guitar and kick drum to sound bigger.

GET THE SOUND, CHEAP!

Use the Marshall’s Classic Gain channel cranked way up and with the Deep switch engaged but the Bass knob down low and no Tone Shift. The TV Jones TV Classic pickup provides ideal string and treble zing without sounding shrill.