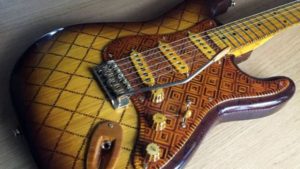 This Strat-Style Guitar is Made Entirely Out of Matchsticks

Guitars can be made out of a lot of unsuspecting materials. Heck, we even told you about a luthier who’s committed himself to making guitars from bamboo just last month! In all our years covering guitars though, we’ve never seen a guitar made from…matchsticks.

British luthier Dean Fraser recently unveiled a Strat-Style guitar that he built entirely from matchsticks. According to a Facebook post from Fraser, the guitar took 40,000 matchsticks and 18 years to build.

The body, neck, pickguard, pickup covers, jack socket, trem cover, switch tip, trem tip and knobs are all made from matchsticks, which Fraser sourced from 24-hour ration packs and his time as an infantryman in the British army.

According to Fraser, the guitar “sounds as good as any high-end guitar should do.”

What’d we give to see a demo of this thing….. In the meantime though, be sure to check out Fraser’s other instruments at fraserguitars.com.