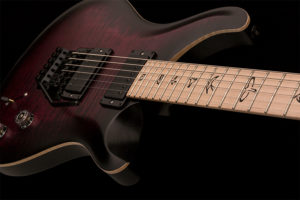 PRS has jumped the NAMM gun with three new models announced today. The most luxurious of the trio is the Private Stock Hollowbody II 594 Limited Edition, while the other two are the DW CE 24 “Floyd” and S2 Studio. The DW CE 24 “Floyd” is a new signature model with Between the Buried and Me guitarist Dustie Waring, and the S2 Studio brings the versatility of a single/single/hum platform to PRS’s S2 Series.

Only 60 Private Stock Hollowbody II 594 limited edition instruments will be made.

The pickups and electronics are Waring’s signature Mojotone “DW Tomahawk” types. Made with a blend of ceramic and Alnico magnets and a special winding technique, DW Tomahawks have plenty of output and big bottom end while remaining articulate and clear – a unique quality for high gain pickups, PRS says.

There is no cap to the number of DW CE 24 “Floyd” signature or S2 Studio guitars that will be made, but the order window for these models is limited to 16 January – 31 March, 2018.