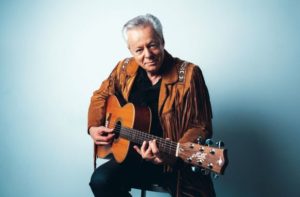 Tommy Emmanuel has recorded his fair share of collabora­tive albums with guitarists such as Chet Atkins, Martin Taylor and Frank Vignola, but he’s never attempted anything as wide-ranging and ambitious as Accomplice One.

Over the course of 16 tracks, both originals and covers, the acoustic guitar master trades licks and vocals with a stun­ningly diverse group of artists like Jason Isbell, Mark Knopfler, Ricky Skaggs, Rodney Crowell, David Grisman and Jorma Kaukonen—and that’s just for starters.

“This project was a real labor of love and a lot of fun,” Emmanuel enthuses. “It gave me a chance to play with artists I admire, and I’m happy to call them friends. We always bump into each other at shows and say things like, ‘We should do something together,’ but a lot of times it never happens. So I decided, I’m gonna put together my wish list and get on it.”

Recording Accomplice One was no simple affair—in all it took two years to put together. The Australian-born Emmanuel, who has called Nashville home since 2003, insisted that, whenever possible, he and his guests would record together at one of two of his favorite studios, Music City’s Omni­Sound Studios and at Tunesmith Studios in the nearby town of Goodlettsville.

“It would have been easier for me to simply record songs and send files to everybody,” he notes. “That’s the way a lot of these albums are done these days—remote recording. But I wanted true col­laboration, me in the studio with another artist. So once I had my list, my manager and I had to reach out to people and see when they’d be coming to town. It was a lot more work that way, but I think it yielded the best results.”

One of the record’s highlights is the jazzy, bluesy “You Don’t Want to Get One of Those,” a cheeky vocal-and-guitar duet between Emmanuel and Mark Knopfler. The former Dire Straits main man was keen to be part of the project, but he was loath to leave England. As fate would have it, Em­manuel was visiting his U.K.-based daugh­ters, so he dropped by Knopfler’s British Grove Studios and the two pals got to work. “Mark had written that song, and I loved it immedi­ately,” Emmanuel says. “Our styles fit together beautifully, so we got the whole thing done fast—recorded, mixed and mastered in 90 minutes.”

Emmanuel worked at a similar pace with Dobro virtuoso Jerry Douglas when the two teamed up for a furious bluegrass instrumental take on Jimi Hendrix’s “Purple Haze.” “Jerry and I were backstage one day, and we both got to talking about how much we loved that tune,” Emmanuel says. “I said, ‘We should do it together then.’ We had such a good time on that. One take and it was done.”

He also counts himself a big fan of Madonna, and his collaboration with fiddle star and singer Amanda Shires on a country ballad version of “Borderline” oozes aching sensuality. “I have to credit a Swedish artist named Theresa Andersson for giving me the idea to do the song that way,” Emmanuel says. “I sent Amanda a video of Theresa and me doing it as a bal­lad, and she totally loved it. A great song lends itself to various interpretations, and ‘Borderline’ is a gem of a song.”

With rare exception, Emmanuel’s go-to guitars on the album were his signature Ma­ton acoustic-electrics. On a few tracks he utilized a Martin D-28 as well as an OM-style acoustic made by Ten­nessee luthier David Taylor. “There’s a little sprinkling of electric on ‘Borderline,’ he points out. “I used my ’66 Tele for that. It gave the song a nice color.”

Not every track cut for Accomplice One made it to the finished album, and Emmanuel happily reports that a follow-up is definitely in his plans. “I’ve already got a few songs in the can for Accomplice Two,” he says. “Plus, there were some artists I wanted to work with who weren’t available this time around, so I’m hoping to get them for the next one. I’m really proud of the first one, and I’d be thrilled if it turns into a series of records.”