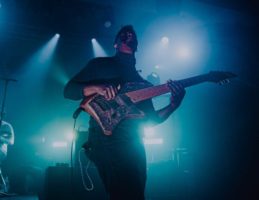 Animals As Leaders frontman Tosin Abasi, one of the early adopters of ergonomic, extended-range guitar designs, has officially launched a new company, Abasi Guitars. The company’s instruments, which were conceived and designed by Abasi, will be manufactured by veteran luthier Frank Falbo at his shop in Ventura, California.

Falbo, founder of Falbo Guitars, is a member of Fishman’s R&D team and a former vice president of product development at Seymour Duncan. Andy Alt—Steve Vai’s marketing director and the creator of A Little Thunder pickups—represents the final third of the Abasi Guitars team. Alt has worked in a marketing capacity for Plini, Intervals and other progressive, guitar-based acts, not to mention several contemporary retail and tech brands.

If you follow guitar-based news, trends and social media, you might’ve seen Abasi’s flagship design before; at one point, the guitarist was in talks with Ibanez to release it as Abasi’s latest extended-range Ibanez signature guitar, following the popular TAM10 and TAM100 models. In the end, however, Abasi realized—along with Falbo and Alt—that his design was bigger than just one model with eight strings.

“[Ibanez] was down to do it, but the prototyping process just proved to be really lengthy,” Abasi told Guitar World last week. “It’s not the fault of Ibanez—it’s just the reality of large-scale manufacturing. Also, once you plug something like locking tuners into the actual math of the whole supply chain, you’re quadrupling the cost of that particular feature. So things like that made it cost prohibitive to design the guitar exactly the way I wanted, even though we love Ibanez and the great work they’re doing.

“Andy and I were brainstorming, and he said why don’t you have Frank build your guitars? I’d already commissioned an eight-string fanned-fret classical from him and worked with him with Fishman’s Fluence pickup line, so I knew he was into innovative ideas that actually pushed the guitar forward as opposed to being arbitrarily different. I knew he was an extremely smart guy who’s shown his abilities in very different ways.

“So the fact that he had the capacity to do the guitars, he’s local and we already had a relationship, it was this perfect epiphany moment where I realized I had all the moving parts to take my design and do it the way I wanted. And it turns out I’m even more drawn to the processes of making guitars than I initially thought.”

Abasi designed the unique ergonomic fanned-fret, eight-string guitar—pictured several times on this page—from the ground up. It functions as a multi-scale or straight-scale platform with a comfortable neck profile, even for players who are new to extended-range and multi-scale guitars. Its somewhat rounded shape and generous body contours allow for a bevy of comfortable playing positions; meanwhile, the eye-catching front bevel lets the player’s hand sit more flush with the guitar’s body.

“It’s evolved into a different instrument than Tosin’s earlier prototypes, and it offers even more options,” Falbo added. “In this case, it’s six-string, seven-string, eight-string, multi-scale or straight—there are different color options and different wood options. There will be some set models, but we’ll have the ability to add custom features if customers want them.” Perhaps the biggest departure is the guitar’s long tenon, deep-set neck joint; it’s slim enough to allow unprecedented upper access and retain the liveliness of a bolt neck with the sustain of a set neck.

Abasi—as detailed in countless Guitar World interviews over the years—has always been a forward thinker, whether the topic is Animals as Leaders’ brawny, blindingly virtuosic post-thrash, prog-metal—or the instruments he uses to create it. As expected, he’s already looking to the future.

“Beyond the ability to have this guitar available to the consumer in different string configurations or with or without a headstock, etc., I actually love designing guitars—so we want this to be an entire product line,” he said. “From a creative standpoint, it’s fulfilling to collaborate with an amazing luthier and all the available materials and tech and to listen to our fan base and respond to consumer desires and produce what we think are really good answers to those needs. Moving forward, we’d like to have a whole line of guitars and signature artists as well.”

Within the past three years, a handful of popular guitarists have leapt into the guitar-manufacturing game, but Falbo stressed that this is a very different situation.

“Tosin’s not the first artist to cross over into guitar design and manufacturing, but it’s never really been done this way,” he said. “My overarching design philosophy is carve the first one and CNC [Computer Numerical Control] the rest. Sculpt the first so you know what you’re repeating with the CNC. That’s how you maintain unparalleled quality and consistency levels—a balance of automation and hand work. In this case, a very capable U.S. shop will be able to fulfill orders and meet demand, no matter how big it scales.”

“An artist paired with a luthier is a winning combination that Tosin exemplified previously with smaller builders, so the experience is already there,” Alt added. “You arrive at this conclusion where he gets form and function, but it becomes realized in real time. The shop is very close to us [in Southern California], so we don’t have to deal with distance or prototypes being mailed to us.”

“I’m not playing a six-string guitar made by one of the big companies and just decided that my brand value exceeded their royalty rates,” Abasi said. “I have design needs that only the most adventurous companies were even willing to tackle. Ibanez has been that company. ‘Hey, you want more strings than anyone has ever considered putting on guitars? Sure!’ But then I kind of wanted more than that, so that’s where my history of custom guitar, commissioned guitars, goes back to me wanting to work with a team that could do whatever they wanted, design wise. As an artist, that’s where my needs lie. I think I have a fan base that also would love more conceptual designs and things that are more catered to their needs. As a member of that guitar community, I’m in a perfect position to make the dream guitar company that’s most concerned with those players that really access the designs they want from other places.”

Abasi, Falbo and Alt haven’t officially announced a starting price, but it’s safe to say it will be in the vicinity of $3,200. Abasi Guitars will attend the 2018 Winter NAMM Show (booth 4130), which takes place January 25 to 28 in Anaheim, California, so stay tuned for more product photos, details and launch information.

In the meantime, you can follow along at abasiguitarsusa.com and @abasiguitars on social media.