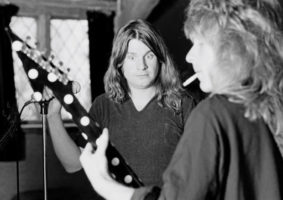 This month, I’d like to illustrate a very clear and effective way to memorize the series of scales that are collectively known as the seven fundamental modes. I consider these modes to be essential learning for any aspiring metal soloist. The majority of them are also equally useful for soloing in other styles, such as blues, rock, jazz and country.

This month, I’d like to illustrate a very clear and effective way to memorize the series of scales that are collectively known as the seven fundamental modes. I consider these modes to be essential learning for any aspiring metal soloist, and indeed, Randy Rhoads put a spotlight on the modes within the context of metal guitar. The majority of them are also useful for soloing in other styles.

Western music is based on what is known as the 12-tone system, wherein there are 12 pitches, half steps apart, that fall within one octave (from a given note to a higher note with the same name, such as E to E). The guitar fretboard is divided up in half steps, as the intervallic distance between each fret is one half step. A span of two frets equals a whole step.

The major scale, or Ionian mode, is based on a specific progression of whole and half steps, and the other six modes are reorientations of this whole step–half step sequence.

A great way to visualize this on the guitar is to play the major scale (Ionian mode) on one string. FIGURE 1 illustrates the G major scale(G A B C D E F#) ascending the low E string. When examining the distance between each note in the scale, we see the progression of whole and half steps is whole-whole-half- whole-whole-whole-half (W-W-H-W-W- W-H). Memorize this sequence, as this pattern will be revisited in different incarnations as we go through all of the fundamental modes.

The way to find the second fundamental mode is to start from the second note of the major scale and ascend to the same note one octave higher. FIGURE 2 illustrates the A Dorian mode, starting from the fifth fret of the low E string and ascending to the 17th fret. We can see that the series of whole and half steps is different for the Dorian mode, as we have begun from the second note and the series shifts up. For Dorian, the pattern is W-H-W- W-W-H-W.

FIGURE 3 illustrates the third mode, B Phrygian, which begins from the third note of the G major scale, B. The interval series for Phrygian is H-W-W-W-H-W-W.

Now let’s play each of these three modes in one position, moving across all of the strings. FIGURES 4–6 show G Ionian, A Dorian and B Phrygian all played in second position. In FIGURES 7–9, I begin with the associated power chord for each mode and follow it by ascending and descending through each mode. Next month we’ll look at the remaining four fundamental modes: Lydian, Mixolydian, Aeolian and Locrian.