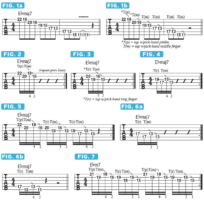 Using Four Fingers to Tap Arpeggios, and How to Play the Lick to "Sevens"

Before getting to the “Sevens” lick, I’m going to break down the technique involved so that you will be able to apply this idea to creating riffs of your own. The genesis of the lick was in trying to find a new way to play a major-seven arpeggio. I started out by breaking it down into two notes per string, as shown in FIGURE 1a.

Using the index finger and pinkie only, I descend from the major seventh of Eb, D, at the 22nd fret of the high E string, to a low Eb on the sixth string’s 11th fret. I then took this idea and performed it with fretboard tapping, as shown in FIGURE 1b. Now, the higher note in each pair is sounded with a pick-hand fretboard tap, and the lower note is sounded with a fret-hand “hammer-on from nowhere.” Be sure to tap hard onto each note so that it will sound clearly, and try to not allow any of the notes to ring into each other.

The next step was to break up the descending pattern and play it non-sequentially. What I arrived at was FIGURE 2. Here, I sound consecutive single notes on the high E and B strings, both sounded with fretboard taps, followed by the lower associated notes on the top two strings, sounded with fret-hand hammer-ons. The fret hand mirrors this approach by also using the pinkie and middle fingers. Start by playing this pattern slowly and then increase the speed.

Now let’s take this same approach and apply it to the four-note groups on the lower pairs of strings, starting with the B and G strings, as shown in FIGURE 3. I use the same technique here but switch to the ring and middle fingers for both the pick-hand taps and the fret-hand hammer-ons.

In FIGURE 4, I’ve moved the idea down one more pair of strings to the G and D. Here, I tap with the middle and ring fingers of the pick hand but use my frethand pinkie and middle finger to fret the other notes.

FIGURE 5 then runs the three patterns together. You can take this idea further by continuing onto the two bottom pairs of strings, as demonstrated in FIGURES 6a and 6b. Now that you’ve got the idea, try some different arpeggios: FIGURE 7 outlines Ebm7, and FIGURE 8 begins with Ebsus4 and then moves through Ebmaj7 and Ebm7.

Finally, the “Sevens” lick, appropriately played in a meter of 7/4, is shown in FIGURE 9. Using the same technique, I move through the different pairs of strings in a specific alternating pattern.

Kristiine Silinja: "I love exploration, adventures, and freedom. All that comes with a six-string bass"