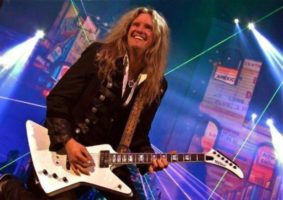 No matter what your skill level or preferred style of music, being aware of the intervallic relationships between notes is going to be useful in many different ways.

No matter what your skill level or preferred style of music, being aware of the intervallic relationships between notes is going to be useful in many different ways.

Most of you have heard the term “the one” in regard to the note that represents either the name of the chord you’re playing or a song’s key center. But those other intervallic names—the 2, 3, 4, 5, etc.—may be a bit of a mystery. The concept for intervallic relationships is actually fairly simple and can be easily understood by looking at the major scale.

Let’s use this concept to move up through the G major scale and create a progression of 1-3-7 sounds; in FIGURE 3, I begin with 1-3-7, which outlines a Gmaj7 chord, followed by “2-4-8”—A C G—which sounds Am7. The pattern then continues, creating a harmonized scale that ascends to Bm7, Cmaj7, D7, Em7 and F#m7b5 and ends with Gmaj7 an octave higher than where we started. In FIGURE 4, the pattern is phrased a bit differently to make it sound more rhythmically interesting.

I often find myself using chord voicings like these in rhythm parts I devise for songs; in FIGURE 5, I alternate between Em7 and F#m7 voicings, built from the 1-3-7 shape, while dropping in an open low E pedal tone.

If we phrase the shapes shown in FIGURE 3 as straight 16th notes, we get what is shown in FIGURE 6: here, I use hybrid picking to obtain more speed and clarity from the phrase, wherein the low E string is sounded with the pick, and the A and D strings are plucked with the middle and ring fingers, respectively. Another approach is to move through this type of pattern while staying mostly in the same area of the fretboard. In FIGURE 7, I employ hammer-ons in every other three-note group to accomplish this technique.

FIGURE 8 combines Am7 and Em7 shapes in a cool sounding riff, and in FIGURE 9, I expand on the idea by bringing a Cmaj7 triad shape into the mix. In FIGURE 10, triad shapes ascend the top three strings, with pull-offs used on the B and high E strings that create a 16th-note triplets phrase.