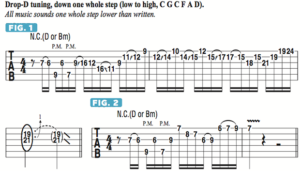 In writing riffs and song parts for the music of Periphery, it’s important to me to evoke a sense of movement and fluidity. If you’re familiar with the band’s music, you’re well aware that we have a penchant for employing unusual meters that shift unexpectedly, as well as harmonically dense chord progressions and polytonal chordal allusions.

One of my favorite ways to achieve a sense of movement is to perform single-note riffs that incorporate dramatic position shifts up and down the fretboard, necessitating very specific movement that is often articulated with extended finger slides.

And keep in mind that I almost always tune my guitar to drop-D down one whole step (low to high, C G C F A D), which many players refer to as “drop-C” tuning.

There are a couple of leads on the new Periphery album, Juggernaut: Omega that I perform by sliding around through different registers of the fretboard. FIGURE 1, an excerpt from my solo in the song “The Bad Thing,” is one of those passages.

I begin on the upbeat of beat one, with a pull-off from D to C# on the G string in sixth position. The third note, F#, falls on beat two, and after picking the last note of this beat, E, I slide up to the 16th fret to sound B and then G and F# on the D string in the same position. I then slide from the F# note on the D string’s 16th fret down to ninth position.

Starting on beat four, I perform four ascending slides on the B string, the notes of which alternate with higher-pitched notes fretted on the high E string that are whole- and half-steps apart. Then, on beat four, I quickly jump from 15th to 19th position and perform a wide stretch from the 19th to the 24th fret.

I could have alternatively played the first bar of this passage in sixth position, without the shifts up and down the fretboard, as demonstrated in FIGURE 2, but, to my ears, playing the same notes while sliding up to different areas of the fretboard adds a new and different “layer” of sound to the line. Also, the implied tonality of the lick is ambiguous, as it suggests either D major or B minor.

The song “Priestess,” also from Juggernaut: Omega, features a solo lick that’s very similar in approach, in regard to my use of long finger slides and frequent position shifts. As shown in FIGURE 3, I begin on beat four of the pickup bar and then slide up to the ninth fret to quickly jump between the G and A strings to sound individual notes.

As in FIGURE 1, the first two notes on the A string are palm-muted. In bar 3, I use consecutive ascending slides on the B string, played alternately against notes on the high E string, followed by a dramatic slide back down the G string to 12th position, where the majority of the remainder of the lick is played, culminating in a slide back up the 15th position.

Notice that all these position shifts require some thinking ahead, in terms of what fingers to slide with, so that the fret hand will be optimally positioned for the next phrase.