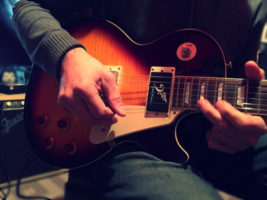 Using Sweep Picking and Tapping to Outline a Chord Progression

Last month I demonstrated how to expand the range of a sweep-picked arpeggio by adding a fretboard tap above the highest note.

This month, I’d like to show you how to use arpeggio sweeps, with and without taps, to melodically outline, or describe, a chord progression. Just because I show you a run in one key and fretboard location it doesn’t mean that that’s the only place to play it.

In FIGURE 1, I outline a Dm-C-Bb-A-Dm chord progression using a series of sweep-picked arpeggios with taps added. The notes of each arpeggio are sounded in ascending and descending order and are performed in a continuous sextuplet rhythm (six evenly spaced notes per beat).

I play the ascending and descending Dm arpeggio twice then shift down two frets to sound the notes of a C major arpeggio. Notice that the shape is altered slightly to accommodate the change from minor to major. I then move this same major shape down two frets to Bb, and then one more fret to A. The entire phrase then resolves satisfyingly with a return to the initial Dm arpeggio. For reference, FIGURE 2 illustrates the Dm-C-Bb-A chord progression from FIGURE 1.

In bar 1 of FIGURE 3, I demonstrate the Dm sweep without the tap added on top, using a quintuplet rhythm (five evenly spaced notes per beat). Practice this arpeggio in ascending and descending manner until all the notes sound crystal clear and you get the rhythm flowing. In bar 2, for the sake of comparison, I restore the tapped high D note from FIGURE 1, with the added hammer-on and pull-off, using the slightly faster sextuplet rhythm.

Now let’s try applying sweep arpeggios to a more complex and unusual chord progression. FIGURE 4 is a five-bar run that features a steady flow of sextuplet arpeggios that melodically outline quickly changing chords, with a few surprise modulations to unexpected tonal centers. The entire figure is performed on the top three strings. While playing through this figure, notice the similarity between the arpeggio shapes, such as the symmetrical shapes used for the 7b9 arpeggios, which can be moved up or down three frets to outline the very same chord.