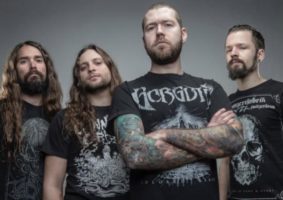 Using Syncopation to Disguise the Meter

One of the signature elements of Revocation’s music is our embrace of unexpected rhythmic shifts and syncopations that obscure, or disguise, the meter and de-emphasize the downbeat of the bar (where “one” falls).

I often drive our drummer crazy because I will intentionally place the downbeat of “one” of a given riff in a place that feels either unexpected, deceptive or even downright odd. A perfect example of this type of rhythmic trickery is featured in the song “Theater of Horror,” from our latest album, Great Is Our Sin.

The inherent rhythm, starting from the “one,” is “DA-da DAAA, DA, DA-da-DAAA,” etc. Harmonically, the phrase is based on the G Phrygian-dominant mode (G Ab B C D Eb F), which is the fifth mode of C harmonic minor (C D Eb F G Ab B). In bars 3–5, I additionally make reference to the G half-whole diminished scale (G Ab Bb B Db D E F). It’s all too easy to get lost when playing this riff, and I find it helps to focus on beats two and four, which is where the snare-drum hits fall.

Most of the notes in this phrase are tremolo picked, meaning alternate picked (down-up) as quickly as possible. The only exceptions are notes found in the last two bars of FIGURE 1, wherein I switch to straight eighth-note triplets that outline virtually all of the notes of G Phrygian-dominant. When playing along to this riff, strive to tremolo pick as evenly as possible, so that you tightly lock in with the rest of the band. FIGURE 2 illustrates the next signature riff in “Theater of Horror,” and here I switch from accentuating the downbeat of beat four to the upbeat of beat four. All of the lines here are based on steady eighth-note triplets, and the key center of G is still alluded to with the presence of D/F# in bars 1 and 2.

The riff modulates up two whole steps in bar 3 with an allusion to the key of B, via the use of that key’s five chord, F#/A#. As you play through this figure, be aware of the manner in which I incorporate pull-offs, slides, open strings and arpeggiations. What you see here is the development and evolution of certain motifs as the song progresses, which, to my mind, lends a fluid nature and synchronicity to the music overall in the formulation of a cohesive statement.

FIGURE 3 is sort of an amalgam of the prior figures, with alternating emphasis from the downbeat of beat one to the upbeat of beat two and then the downbeat of beat four. Additionally, the pull-offs to the open strings serve to drive the riff forward, as a feeling of “controlled chaos” develops as we get deeper into the shifting nature of the pattern.