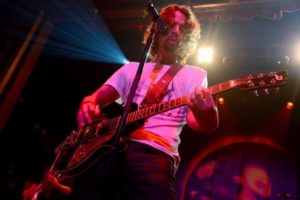 Chris Cornell has posted his new version of Prince’s “Nothing Compares 2 U,” and you can hear it below.

When Prince died in April 2016, Soundgarden main man Chris Cornell shared his heartfelt version of Prince’s “Nothing Compares 2 U.”

After Cornell’s shocking May 18 death, the performance—and the sentiment of the classic song—took on new meaning.

“Prince’s music is the soundtrack to the soulful and beautiful universe he created, and we have all been privileged to be part of that amazing world,” Cornell said last year. “I performed ‘Nothing Compares 2 U’ for the first time a couple of months ago. It has a timeless relevance for me and practically everyone I know.

“Sadly, now his own lyrics in this song could not be more relevant than at this moment, and I sing them now in reverence as I pay tribute to this unequaled artist who has given all of our lives so much inspiration and made the world so much more interesting.

“We will miss you, Prince!”

Below, check out the official studio audio of Cornell’s “Nothing Compares 2 U” followed by his live performance of the tune from late 2015.