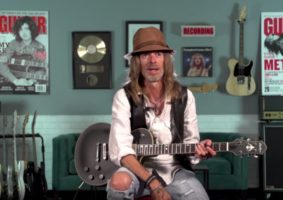 Awhile ago, legendary Pantera bassist Rex Brown stopped by the Guitar World studios in New York. Though he was there primarily to give us an exclusive playthrough video of “Train Song”—a central track off his solo album, Smoke On This—he also candidly discussed his musical and personal relationship with the band’s guitarist, “Dimebag” Darrell Abbott.

Brown discusses how he occasionally played uncredited rhythm guitar (with Dimebag playing uncredited bass) on Pantera tracks. He also gives us some fascinating insight into how he and Dimebag collaborated on the arrangements of Pantera songs.

“I’ve learned a lot,” Brown told Guitar World in an interview back in July. “If you sit and write riffs with Dimebag Darrell for 20-plus years, you better learn something. If you don’t, you’re out of your fucking mind.”

“When I pick up an instrument, I attack it.” “I don’t just baby it, I don’t sit there and strum it. I want to hear every note, you know what I’m saying?”

You can watch our discussion with Brown below. To read our full interview with Brown from the July 2017 issue, look no further.