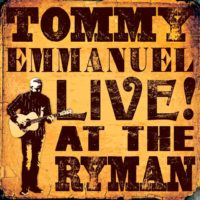 Next month, acoustic virtuoso Tommy Emmanuel will release a new album, Live! At The Ryman.

Today, we’re happy to present the exclusive premiere of a track from the new disc—that happens to have its very own performance video to go with it. It’s a clip of Emmanuel performing Peter Noah’s “San Antonio Stroll” with Steve Wariner and John Knowles, the two other living CGPs—Certified Guitar Players. That’s the honor (and moniker) Chet Atkins assigned to himself and four guitarists he admired and felt contributed to the legacy of guitar playing. These include Emmanuel, Wariner and Knowles.

The song was recorded by Tanya Tucker and famously covered by Chet Atkins in the mid-Seventies on The Night Atlanta Burned. It also was a highlight of Emmanuel’s performance at the historic Ryman Auditorium in Nashville.

“It was an unforgettable experience playing my first solo show at the Ryman,” Emmanuel told us. “I’ve grown up listening to the music and artists that made those walls famous throughout the world, and it was an honor to play on that stage.

“The night was a lifetime goal of mine, and it was made that much more special with the appearance of my two good friends and fellow ‘CGPs,’ Steve Wariner and John Knowles. I’m so thrilled that we filmed and recorded the show, as John, Steve and I had never collaborated together before—and this made the night even more special.

“The sold-out crowd just about lifted the roof off the hall and we all gave it our best! The spirit of Chet Atkins surrounded us with love, peace and mojo! I hope those who hear this recording will be uplifted and feel the love we felt for the people who poured their joy into the Ryman Auditorium that February night!”

Live! At The Ryman will be released May 19.