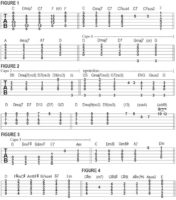 What do Stone Temple Pilots, Phish, Led Zeppelin and the Beatles Have in Common? This Progression

Resuming our recent survey of popular, appealing chord progressions (see GW February and April 2018), I’d now like to cite some great, well-known examples of what I and others refer to as the “major chromatic drop,” which describes motion within a major chord in which the root note descends chromatically—one fret at a time—while the third and fifth remain stationary and function as common tones.

The major chromatic drop has been employed in many songs, probably the most famous and celebrated example being the Beatles classic “Something,” for which guitarist George Harrison begins each verse on an eighth-position C barre chord, followed by Cmaj7, then C7, which he then resolves satisfyingly to F. “Waste” by Phish begins with virtually the same changes, but guitarist Trey Anastasio employs different barre chord shapes and a quicker harmonic rhythm (rate of chord change) in that song and adds a simple but effective sus4-3-2 melodic embellishment to his C7. In both cases, an inner voice descends from C to B to Bb to A.

The chorus to “Bell Bottom Blues” by Derek and the Dominos (with Eric Clapton) features a similarly sweet major chromatic drop, here in the key of A: A Amaj7 A7 D E, as does the verse to Joe Cocker’s “You Are So Beautiful,” a half step lower, in Ab: Ab Abmaj7 Ab7 Dbmaj7, which may be conveniently played on guitar with a capo at the sixth fret, using first-position open chord voicings of D, Dmaj7, D7 and Gmaj7. FIGURE 1 illustrates a few sets of standard chord shapes that work well for these kinds of progressions in various keys.

Other famous songs that briefly follow this same or similar kind of chromatic major drop are “Kodachrome” by Paul Simon, which, midway through the second verse, moves from D to Dmaj7 to D7 then resolves to G (transposed up a whole step to the key of E, via the use of a capo at the second fret) and Led Zeppelin’s “The Rain Song,” the intro to which, legend has it, was inspired by a friendly challenge George Harrison made to Jimmy Page to “write a great ballad, like ‘Something.’ ”

Using an original open tuning and majestic chord voicings, Page begins “The Rain Song” on G5, followed by Gmaj7(no3) and G7(no3). But then, instead of providing the expected resolution to the IV chord in the key of G major, C, he moves to a hauntingly beautiful Eb/G, a chord “borrowed” from the parallel minor key, G minor, then to Gadd2.

Coming back to the Beatles, Sir Paul McCartney employed the chromatic major drop beautifully, in the key of D, in both “Mother Nature’s Son” (at the end of the “do do do” chorus section) and, later, with Wings, for his live ending to “Maybe I’m Amazed.” FIGURE 2 shows some nice sets of guitar voicings inspired by these songs.

Two more “golden oldies” that utilize this same kind of chromatically descending bass line starting on a major chord are Simon’s “Homeward Bound,” the verse progression to which goes G, Bm/F#, Dm/F, E7 Am (transposed up a minor third, from the key of G to Bb, via the use of a capo at the third fret) and “My Way,” famously recorded by both Frank Sinatra and Elvis Presley, the verse progression to which is nearly identical, the Chairman’s key being D—D F#m/C# Am/C B7 Em—and the King’s preferred key being C—C Em/B Gm/Bb A7 Dm. FIGURE 3 shows some good ways to play these chords on guitar.

A more modern song that features an interesting and original twist on both the major and minor chromatic drop is “Interstate Love Song” by Stone Temple Pilots. Guitarist Dean DeLeo begins each verse on a minor chord and then, on the third chord in the progression, plays a major chord based on the same root note but with a lower bass note, similar to FIGURE 4.