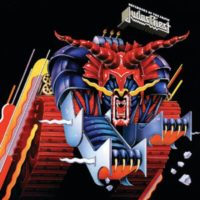 What to Remember When Performing Judas Priest's "The Sentinel"

Throughout “The Sentinel,” guitarists Glenn Tipton and K.K. Downing perform pinch harmonics to punctuate their rhythm and lead melodies with piercing note squeals, such as those heard in bar 2 of the song’s opening riff. Indicated by the abbreviation “P.H.,” a pinch harmonic is performed by picking a downstroke while lightly touching the string with the side of your pick-hand thumb at one of several specific nodes along the string’s length, the locations of which are different for each fretted note(!).

So, learning to produce pinch harmonics requires some trial-and-error experimentation, pinching up and down the string in the area over your guitar’s pickups until you find the various nodes.

The easiest way to smoothly play Tipton’s blistering arpeggio licks in bars 105–109 is to maintain a constant fret-hand “grip” on each of the three-note chord shapes that the guitarist employs throughout the run. For example, beginning on beat four of bar 105 (Gtr. 4 part), use an index-finger barré in conjunction with your middle finger on the G string to create an “F-shape” triad on the top three strings as you pick through the next four beats.

For Jeff Perrin’s tab of “The Sentinel,” check out the May 2018 issue of Guitar World.