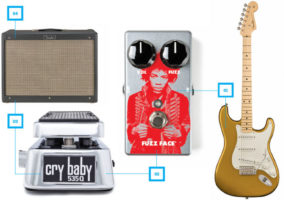 Where to Place Effect Pedals in Your Signal Chain

Most effect pedals offer guitarists a cheap and easy means of personalizing their guitar tone, and even the expensive boutique products favored by the most discriminating pros (or the most insufferable internet forum dweebs) usually cost less than a new guitar or amp.

If you’ve been playing for a while, chances are pretty good that you’ve probably already built up a collection of four, five or 10 stomp boxes, which now leaves you with the question of how to hook them all up and use them in your rig. Or perhaps you’ve hooked everything up and wondered why you get howling feedback, excess white noise, hum or silence whenever you engage two or more pedals at once.

Like most things involved with creative pursuits like making music, there isn’t a steadfast right or wrong way to do things, but if you encountered any of the problems above you’re definitely doing things wrong (unless you play in a German nihilist industrial noise band, in which case, go nuts). This article will help you avoid those scenarios by describing some of the basic rules and suggestions for placing different effects in the ideal order in your rig’s signal chain and how to achieve the best possible tones when using several stomp boxes together. If you’ve ever wondered how to put together your own pedal board, this info will give you a good start toward obtaining the best sound and most versatility out of your rig.

As a general rule of thumb, it’s ideal to place the “broad stroke” effects that have the most dramatic or dominant impact on your sound toward the front of the signal chain while placing the “narrow stroke” effects that refine details toward the end, although there are many exceptions to this concept. For the very front of the signal chain (i.e. directly after the guitar) you should choose effects that react with or depend the most on the dynamics of your playing or the output levels of your pickups to operate at their maximum potential.

If you have an envelope follower, envelope filter, auto-wah or other dynamic touch-sensitive effect, this should go at the very front in most cases, as these effects are almost exclusively dependent upon the dynamics of your playing. Placing most other types of effects in front of them will compress the signal, thereby reducing dynamics and minimizing their performance.

One notable exception is a pitch shifter or harmonizer, particularly if you plan on using a pitch shift and envelope follower together as the pitch shifter may have greater difficulty accurately tracking an envelope follower-processed signal. Similarly, a standard wah pedal generally sounds best in the very front of the signal chain, but once again I recommend placing pitch shifter/harmonizer effects in front of a wah if you plan on using both together. Also, many players prefer the sound of a wah with a distortion pedal placed in front of it as this configuration can produce a more dramatic or more refined sweep depending on the distortion pedal’s tonal character (See Example 1, below).

Next in line after pitch shift/harmonizer and envelope follower effects are pedals that directly interact with the pickups’ output levels, such as vintage fuzz, treble booster and Octavia/fuzz octave pedals. As with the dynamic filter pedals, placing any other effects that compress the signal in front of these pedals will limit their overall performance.

Once you’ve gotten past the touch-or input level–intensive effects, your next primary goal is to refine your tone while at the same time minimizing noise. If you use a compressor, its ideal location is directly after the pitch shifter/harmonizer, envelope follower/auto wah and wah pedals. Because a compressor compresses the entire signal, it’s not recommended to place one after a boost, overdrive or distortion/fuzz pedal as those pedals often generate noise that will be boosted by a compressor along with the guitar’s signal.

Many players today have more than one overdrive/distortion stomp box on their pedal boards and sometimes use both at once. My personal preference is to place the lower gain pedals in front of the higher gain ones, but the opposite is absolutely fine if you prefer the sound of that configuration. Placing overdrive/distortion pedals later in the signal chain can increase noise as the noise of several effects chained together can add up, and any noise produced by other effects going into an overdrive/distortion effect will be boosted along with the guitar signal.

For most players, the ideal location to place modulation effects—which include phase shifters, flangers, chorus, rotary, tremolo, vibrato and so on—is directly after a compressor and/or overdrive/distortion pedal. When these effects are distorted after the fact, the sound tends to smear and lose definition (particularly with chorus), although there are a few exceptions where distorting a flanger or phase shifter can sound really cool. The best example is Eddie Van Halen, who doesn’t use distortion pedals and instead generates all of his distortion from the amp. When a flanger or phase shifter is placed in front of a distorted amp or overdrive pedal, it can create dramatic thick, jet-like phasing and flanging effects (See Example 2, below).

While all of the aforementioned stomp boxes (pitch shifter, envelope follower, wah pedal, compressor and overdrive/distortion) should be plugged into the amp’s input, modulation effects can be connected to an amp’s effects loop instead of into its input. Again, this is a matter of taste. Some guitarists prefer the more “pristine” sound quality of modulation effects patched into an effects loop, particularly since this setup can help reduce overall noise.

Most players don’t use more than one modulation effect at once, so it doesn’t matter all that much if you place the phaser before the chorus or the flanger in front of the phaser. However, the one exception is tremolo, which should be placed behind other modulation pedals, as this placement will produce the most dramatic and desirable rhythmic on/off effects. Placing a tremolo pedal in an effects loop is also closer to the signal path of an amp with built-in tremolo, but my personal preference is to plug a tremolo pedal into an amp’s front end and save the effects loop for other effects.

The end of the signal chain is where the delay/echo and reverb effects should be placed—preferably with the delay in front of reverb—primarily because both are “ambience” effects that give the illusion of a sonic space or atmosphere. However, placing a delay/echo effect earlier in the signal chain can deliver some very cool and unusual “experimental” effects that are worth trying out, such as pitch shifting or distortion after delay (especially when using separate outputs for dry and processed signals). But unless you’re a completely mad experimental player seeking unorthodox textures and sound effects, reverb should go after everything else as its role is to replicate the sonics of a room, hall or other environment.

Delay/echo effects can sound pretty good when plugged directly into an amp’s input (See Example 3, above)—hell, the Edge built a whole career out of doing just that—but if you want absolutely clean, pristine delay and echo effects with no distortion, the effects loop is the only way to go. Reverb effects should always be patched into the effects loop (See Example 4, below) unless you always play through the cleanest of clean sounding amps. Overdriven or distorted reverb just ain’t very pretty, and it can destroy any semblance of clarity or definition and smear your sound like the ketchup on a baby’s face when it’s trying to master the fine art of eating a messy pile of French fries.

If you’re paying attention, you probably noticed that I forgot to mention EQ and volume pedals. Actually I didn’t. Placement of these particular pedals depends more on what you want to achieve with them than any hard and fast rules. For example, you may want to place a volume pedal at the very front of the signal chain to perform dramatic fade in and fade out effects or to better regulate the guitar’s level before it hits any effects (or you could just do what I do and use the guitar’s own volume control). Placing the volume pedal near the end of the signal chain just before the delay and reverb effects allows you to perform professional-sounding fades or mute the guitar’s signal without cutting delay or reverb tails short. If you use a loop switcher, a volume pedal can be paired with a single effect, and you can use the volume pedal to blend or mix that effect independently.

EQ placement is similar. Some players prefer to mold and shape their guitar’s primary tonal character before it is processed by other effects, but others prefer to adjust the EQ of the finished sound (again, placement in front of delay and reverb is preferable). Or maybe your distortion pedal’s EQ controls just don’t have enough bass or treble and you need to tweak its tone a touch more. If you own an EQ pedal, have fun and try placing it in different locations to see what works best for you.

I also didn’t mention a tuner, but that’s because a tuner really isn’t an effect. If you use one, the ideal location is in the very front of the signal chain right after the guitar as you don’t want the signal going into the tuner processed by any effects that might affect the tuner’s accuracy. Even better, get a loop switcher with a separate tuner output that keeps the tuner entirely out of the signal chain until you need to use it and that will mute the signal so the audience doesn’t need to suffer while you make adjustments.