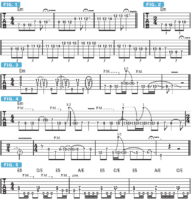 This month, I’d like to delve deeper into concepts for expanding scalar ideas across the fretboard. As in the previous columns, I’ll demonstrate how to move diagonally across the fretboard to connect scale positions, an approach that I employ to a great extent to play melodic phrases and solos. Let’s start with a series of phrases that are all based on the E Aeolian mode, or E natural minor scale (E F# G A B C D). FIGURE 1 details a series of three different three-note phrases, each played in a three-notes-per-string pattern and starting with the index finger. I begin in seventh position and play through the first six notes of E Aeolian. In bar 2, I shift up to ninth position and play a six-note pattern that begins on the fifth degree of E Aeolian, B, sounding the notes B C D E F# G. Finally, I move up to 11th position to play a six-note pattern beginning on the second, or ninth, F#, sounding the notes F# G A B C D. The high D at the end of the phrase is useful, because it can easily be bent up one whole step to the E root. By connecting all three patterns this way, I am moving up the fretboard in a diagonal path that covers a lot of range. A great way to practice this pattern is within a steady series of eighth-note triplets, as seen in FIGURE 2. Use alternate (down-up) picking throughout, and strive to make the position shifts seamless. Once you have these “shapes” for each six-note group under your fingers, you should be able to move freely from the A string to the D and G and back, using just your ear to guide the melodic phrases you create. Within the first six-note phrase, we have the notes of an E minor triad: E G B. Now let’s look at how we can apply notes from this series to create different chord types. In FIGURE 3, I demonstrate voicings of Em, Esus2 and another “wide-stretch” Em voicing from the notes found in this pattern. I can then play melodic fills based on it. FIGURE 4 offers a more expanded example of this concept. I’ll often use this approach to create chordmelody-type ideas, such as that shown in FIGURE 5. Here, I’m using the open low E note as a pedal tone played against various two-note chords. I also like incorporating the ninth, F#, into Em voicings, resulting in the wide-stretch Em(add9) shapes shown in FIGURE 6. FIGURE 7 puts a twist on this idea by adding the second, also F#, to an E minor triad, E G B. Lastly, I use note combinations from the pattern to create a series of two-note chords that live in E Aeolian, as demonstrated in FIGURE 8. 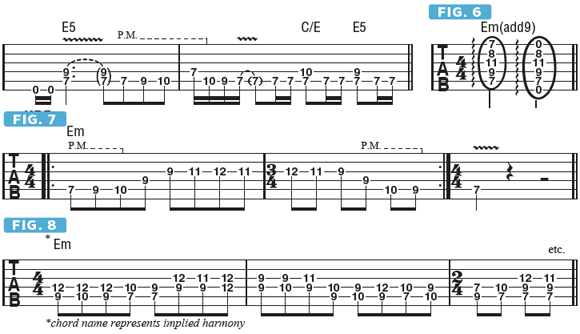