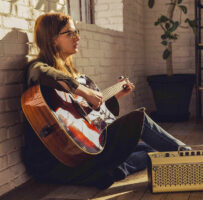 Yamaha today announced the ten-year anniversary of the THR® series of amplifiers. Launched in 2011, the series established the desktop amplifier category with the original THR5 and THR10. These amplifiers delivered realistic tube amp modeling, hi-fi audio playback, onboard effects, and an integrated USB audio interface in a compact and stylish package that proved popular with guitarists around the world. The line-up has expanded and evolved throughout the intervening decade, and the first THR-II models were introduced in 2019, followed by the acoustic-focused THR30IIA Wireless in 2020.

“THR originated with the concept of a third type of amplifier,” said Dave Miner, Product Marketing Manager, Yamaha Guitar Group. “Guitarists are familiar with tube stacks for the stage and combos for smaller venues or rehearsal, and practice amps have historically been smaller versions of these larger amplifiers. We designed THR amplifiers to meet the specific needs of guitarists playing at home, and the response has been remarkable.”

THR responded to these player needs by utilizing technologies developed by multiple Yamaha divisions. The sound of THR begins with Yamaha’s exclusive Virtual Circuitry Modeling, which has been used in Yamaha mixers, synthesizers, and software plugins. VCM models’ circuits at the component level to recreate the sound and feel of professional tube amplifiers. The speakers and enclosures were designed with Yamaha’s award-winning AV division for high-fidelity music playback. Other brands in the Yamaha family are represented as well: all THR models are bundled with Cubase digital audio workstation software from Steinberg, and THR-II Wireless models feature a built-in wireless receiver that is compatible with the Relay® G10T/G10TII transmitter from Line 6.

Yamaha will be celebrating this milestone through the end of 2021 and beyond. Look for more information and announcements about the THR series at yamaha.com and yamahaguitardevelopment.com.

How to watch The Beatles: Get Back documentary and what you can expect from Peter Jackson's epic

Looking for the best multi-effects pedal and amp modeler deals this Cyber Monday? We’ve got you covered