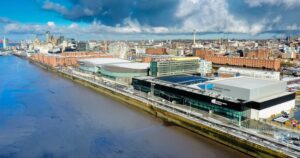 Organisers of The UK Bass Guitar Show are pleased to confirm British bass player Yolanda Charles will take to the live stage with her 6 piece band, when the show returns April 2 & 3 2022 at the ACC Liverpool.

The UK Bass Guitar Show, takes place to coincide with The UK Acoustic Guitar Show, The UK Drum Show and The UK Electric Guitar Show, which all take place simultaneously over the same weekend of the 2 & 3 April in Liverpool.

UK Bassist Yolanda Charles started her career in the music business playing for Jimmy Sommerville from The Communards and within London bands Raw Stylus and Urban Species in the 1990’s.

Yolanda’s more recent sessions included performing with composer Hans Zimmer beginning with the London concerts in 2014, a European tour in 2016 and a 5 month world tour in 2017. She has also worked on various film soundtracks including “A Knight’s Tale” “Alfie” “Home” “War on Everyone” & “Boss Baby’. In 2018 Yolanda broadened her scope of work accepting engagements with Laura Mvula, Mercury Award nominee Eska, Pianist Tomasz Bura’s Jazz Fusion quartet and as part of the Brian Jackson trio UK Band (Gil Scott-Heron co-writer).

2017 she also recorded the latest album with British band Squeeze, “The Knowledge” and toured with them in the UK and US through 2017/18/19

Yolanda hosts well-reputed jam sessions in Soho at the Spice of Life in London aimed at creating a relaxed and fun atmosphere for musicians; allowing both graduates and professionals to network and experience the playing styles of all contributors.

She is also writing for new creative projects featuring compositions destined for an eclectic album with her band PROJECT PH.

“We are thrilled to welcome Yolanda to The UK Bass Guitar Show for our return to live events next April, alongside our other shows,” states Neil Golding organiser. “Having to postpone the debut of the bass show in 2020 due to COVID, we are thrilled to be confirming further artists for the bass show, having concluded and announcing the full line-up for The UK Drum Show which takes place over the same weekend in a neighbouring hall.” “We have further announcements coming shortly for the live stage for the bass show and we are grateful for those that have purchased tickets and continue do so as we count down till next April.

Exhibitors wishing to exhibit within any of the exhibition halls over the weekend of the 2 & 3 April 2022 at the ACC Liverpool, please contact organiser Neil Golding.