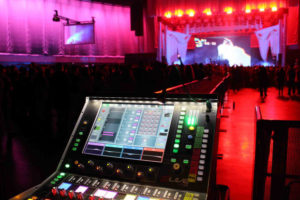 Allen & Heath’s dLive console was the FOH solution at the Agenda streetwear and action sports festival in Long Beach, California, on June 30.

Mike Bangs, touring and live sound manager for Allen & Heath USA, said: “Billie has been out with dLive for a while now and since she was local for this show she opted to go big with a pair of S5000 surfaces with DM48 and DM0 MixRacks. The fully redundant configuration was straightforward using a digital split over gigaACE, with 96kHz audio passing through the system around the arena as needed.”

Swedish artist Yung Lean opted for a more portable approach, flying in an Allen & Heath C1500 from Europe to use on his shows in the United States.

Bangs commented: “We had a C1500 running off of a DM0 at front of house for Yung Lean, who brought it all the way from Sweden. They’ve been taking this all over the US, which puts an exclamation point on how portable the system is.”

“The Agenda Festival is all about the next big thing, so it’s fitting to see dLive showing up with multiple artists on the bill,” said Jeff Hawley, marketing manager for Allen & Heath USA. “From the flyable C1500 all the way up to S7000, dLive is the intuitive, powerful and reliable festival console choice no matter which artist steps out on the stage.”