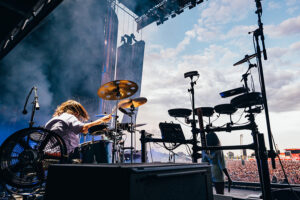 Drummer and Songwriter ‘Woody’ from award winning band Bastille, is to appear in the Mike Dolbear Room, when The UK Drum Show returns to the ACC Liverpool on the 30th September and 1st October 2023.

Woody first played drums at age 11 in his home town of Plymouth. He cut his teeth on the live circuit performing with various local bands and his Dad’s own pub band all over Devon. After moving to London to pursue a music career, Woody studied under the legendary Bob Armstrong.

Having toured with Bastille on arena tours and at festivals all over the world, as well as releasing three more albums including two more UK number ones, Woody has now established himself as both an industry musician and a songwriter.

“We are thrilled to welcome ‘Woody’ to The UK Drum Show and the Mike Dolbear Room for 2023. Woody is someone we have wanted at the show for some time and will complement the announced and yet to be announced artists that will appear over the weekend,” states Neil Golding show organiser.