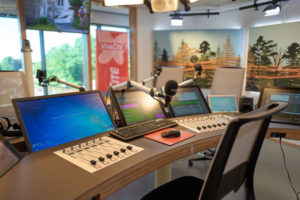 The broadcaster is teaming up with ‘more and more’ local stations

VivaCité is the RTBF’s full service radio channel, serving the Belgian French community with regional broadcasts. The channel has studios in Brussels and five regional centres, and airs on 20 FM frequencies in the south of Belgium. Vivacité holds, with an audience share of 16%, the lead position in Wallony.

Last year saw the opening of two brand new radio studios for VivaCité, in Libramont and Charleroi, after the public broadcaster teamed up with local media to enhance proximity with the audience. All of the new studios are DHD-based and are equipped for both radio and TV. The technical integration of the two new radio studios and one television studio was carried out by Amptec who took on the design, system integration, custom-made furniture and cabling of the studios, as well as the supply of the technical equipment.

In Libramont, the RTBF found a new location for its regional studio, which had been relocated from Arlon. In a new building, both the public broadcaster’s VivaLux (the VivaCité radio channel for the Luxembourg region), as well as local TV station TV Lux, have on-air and production studios.

“The idea is to team up more and more with local broadcasters,” says Laurent Finet, head of production and digital radio innovation at RTBF. “We share editorial content and news, resulting in a positive synergy.”

The new on-air studio, used by VivaLux for its regional broadcasts on radio, is also streaming on RTBF’s Auvio platform and broadcasted on TV Lux.

In Charleroi, VivaCité and local TV station Télésambre relocated to the brand new MédiaSambre building: an audiovisual activity hub in the very centre of the city. For the new radio studios for VivaCité Charleroi, sharing with a local TV station went a step further: Finet opted for a ‘hybrid’ studio that is used for the radio and web-streamed Charleroi Matin morning show at VivaCité, and for the TV news bulletins of TéléSambre, the local TV channel in Charleroi.

“We don’t design pure radio studios anymore,” Finet explained. “Today we build studios for visual radio, for the production and broadcast of radio and TV. It’s also more cost-effective in the construction of the studio – instead of adding TV, social media and podcasts afterwards, we decided to give them a spot right in the new studio. It really adds to the dynamics of radio and allows us to deliver high quality broadcasts, both on radio and TV.”

VivaCité’s morning programmes (between 5:30-8:30am) are produced in the radio studio, including visual radio and internet streaming. During TéléSambre’s TV programmes, the studio’s imaging is adapted for the station’s news bulletins on the hour and some 15 locally produced programmes on sports and culture. Amptec also designed specific microphone stands for the on-air studio: the large diaphragm microphones (Neumann TLM 102) are quickly changed to more discreet ones during TV broadcasts.

“Both the Libramont and Charleroi radio studios are quite identical in terms of technical equipment,” explains Bart Lamberigts, project manager with Amptec. “The compactness and organisation of the workflow on DHD consoles has become the standard where DJs can switch studios, or even regional stations, easily – and remote support becomes more effective.”

The main on-air studios are self-operated with the presenter taking on the technical workflow of the broadcast. A DHD XC2-core with a DHD 12 fader MX console for the self-op studio and two DHD TX touch consoles for the journalists’ workstations make up the technical basis for the broadcast set-up. “In Charleroi, where radio and TV work closely together, the XC2 is interconnected with the TéléSambre DHD XD2 core with higher DSP capacity,” adds Lamberigts. “We also installed TéléSambre’s new TV studios with a DHD MX 12-fader console for the smaller ‘daily news’ studio and a DHD MX 20-fader console for the larger production studio. An RTS Intercom system, connecting these studios with the floors and all of Télésambre’s video edit booths, completes the set-up.”