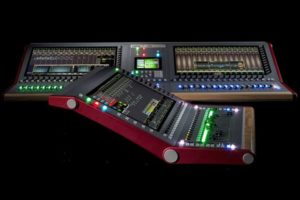 Cadac is celebrating its 50th anniversary year with the launch of the latest model in its CDC digital console series.

A second new console, the CDC seven-s, is also being launched. The CDC seven-s is Cadac’s new flagship CDC console and replaces both the current CDC seven and the inaugural CDC eight.

CDC seven-s offers 128 inputs and 64 busses – of which 56 are assignable (62 in Monitor Mode) – and a number of additional hardware buttons, aimed at speeding up navigation.

With the launch of the CDC five, comes Version 5 CDC Console Software, which features an improved Graphical User Interface with a completely redesigned console control screen.

The GUI has evolved for the CDC five, to include a swipe down feature on its sole 23.5” touch screen which brings up the control screen functions located on the separate 6.5” control screen of its larger siblings. Version 5 CDC Console Software also boasts a number of new features – including Cue Ripple and Cue Preview – and performance enhancements that will feature across the entire CDC range.

Cadac marketing manager James Godbehear said: “CDC five is designed to appeal to a much wider customer base – the sub £10,000 console market. With all of the features, performance capabilities and familiar form factor of the CDC six and CDC seven – plus a number of design enhancements – it will appeal to multi-purpose entertainment production and house of worship applications; as well as to the touring, installation and event markets.”

On its booth at Prolight+Sound, Cadac is exhibiting its full range of CDC consoles – including the two new models – running on the low latency (sub 0.4 milliseconds) CDC MegaCOMMS network; which also incorporates several new network devices and software developments.