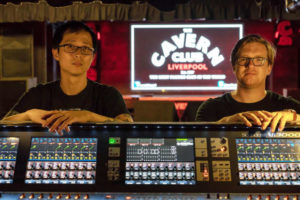 Liverpool’s famous Cavern Club has moved into the digital age by retiring its long-serving Soundcraft analogue desks on its two main stages in favour of a Vi3000 and Si Performer 2.

Director Paul Jones expressed the desire to remain with the familiar Soundcraft topography and emphasised that the iconic Cavern Club (including the organisation’s third venue, the Cavern Pub) will remain exclusively a Soundcraft house.

“We have replaced both our MH3 and GB4 [analogue desks], which have been here since well before I arrived six years ago,” he confirmed. “The MH3 still sounded brilliant, but it was time to move into the digital age.”

The order for both consoles, along with Vi Stagebox, expanding the capacity to 64 mic/line inputs and 32 analogue line outputs, was placed with local dealers Adlib, with whom they have had a close relationship since the late ‘80s.

Jones said there were numerous advantages in going digital—ranging from virtual sound-checks to a more streamlined recording protocol.

“We now have a bit of stability, with regular weekend Cavern Club Beatles nights and other repetition. So we can cut down on sound check time. We have also been able to improve our multitrack recording using the Vi 3000’s built-in Dante facility via our iMac computer and Waves Tracks Live [DAW software].”

The Vi3000 will run both the house sound and monitors in Cavern Live Lounge while the Si Performer will serve the famous front stage­­.

Paul Jones explained that the upgrade had come about as a result of the close relationship between Adlib managing director, Andy Dockerty, and Greg Niven, sales director at Sound Technology Ltd., the UK and Ireland distributors for Harman’s Soundcraft. “We wanted to reap the recording opportunities and he suggested the Vi3000 which I auditioned at Adlib.”

He said that house engineers, Ricky Cheung and Tom Macfie had spent so long on the MH3 they knew the desk topography instinctively, and the fact that the faders were in front of them.

“They wanted hands-on access to individual faders and we didn’t want to change their workflow.

“On a lot of consoles you find yourself menu hopping, but with the Vi3000 most things are within two screens, and you still get that hands-on fader experience.

When it came to equipping the other room, while the Cavern considered the possibility of alternative brands they liked the similarities across the Soundcraft platform, such as FaderGlow, with which their sound engineers were familiar.

“Soundcraft has always been reliable, and Andy [Dockerty] recommended the Si Performer 2 as being rock solid.”

With live music running daily from 11am until after midnight in the various spaces, including acoustic acts in the Cavern Pub, the venue’s compact portable Soundcraft EFX desks are brought into play, and can simply be patched from the main FOH console.

“The new set-up gives us so much flexibility and a much improved audio solution,” concluded the Cavern director. “It is the perfect solution.”