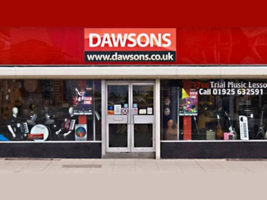 Dawsons Music, one of the UK’s oldest music retailers, has been sold to the private equity company, SKG Capital Nominees.

Warrington based Dawsons was founded by piano tuner John Dawson in 1898 and has been a major presence in the town from its Sankey Street HQ, to which it moved in 1914. The company was family owned until 1980 when it was purchased by David Briggs MBE, and has expanded to nine stores with branches in Altrincham, Bangor, Belfast, Chester, Huddersfield, Leeds, Liverpool, Manchester and Reading. It also runs an education department. In 2010, Briggs was appointed Lord Lieutenant for Cheshire by Her Majesty the Queen. In 2011, Mark Taylor was appointed MD.

SKG is headed by Chris Althorp-Gormlay who specialises in business turnarounds.

Dawsons declined to comment on the sale when approached by MIN.