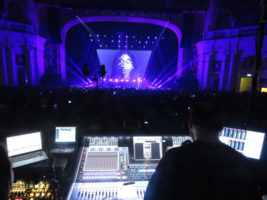 FOH engineer Will Nicholson and monitor engineer Alex Cerutti have used their Digico SD5 and SD12 consoles respectively on the 22-year-old singer’s tour.

Nicholson has been a Digico user for five years and said the scalability of the SD range is “ideal” for his FOH workflow.

He said: “Modern pop touring is often characterised by two significant factors: time and budget. While I haven’t had to make use of the smallest surfaces in the [Digico] range, I have used an SD5, 10, and 7 on this campaign pretty seamlessly, when schedule or territory dictated. The SD5 is my console of choice, provided the I/O fits into its specification – it is such an enjoyable console to mix on. Visually, there is so much information available to you on an immediate level.

Alex Cerutti has been mixing monitors for Dua Lipa for the last 16 months and has developed a strong working relationship with the artist.

“Trust is very important. She has high standards and is very driven, and because of this, pointing her in the right direction – as far as what she wants to hear, and what gets the best out of her – has been easy,” Cerutti says.

For this tour, Cerutti chose the new SD12 console: compact enough to fit into the smaller venues, but still had the features he loved on the SD5 and SD7.

“Having two screens, plus running Waves [plugins] on a separate computer means I can see everything all the time,” he said. “I like that I can have any channel anywhere on the board in any order; keeping important channels where I want them all the time, while keeping my input patch one-to-one with the channel list.”

Dua Lipa will perform across the UK in April 2018, descending on a host of arenas including Glasgow’s SSE Hydro, Manchester’s O2 Apollo, Birmingham’s Genting Arena, and London’s Alexandra Palace.