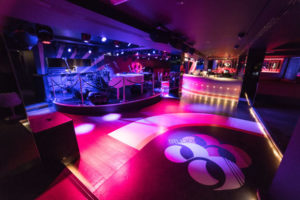 A Martin Audio sound system will deliver audio in a new music venue near Leicester Square.

W1 Productions fitted the speaker configuration in Studio 88, a ‘live music experience and new concept in entertainment’ in Whitcomb Street, designed with the venue’s low ceiling in mind.

The 350-seater venue will feature a live band that will only play music requested by the audience every night.

“I have always been a Martin Audio person, and so it was a no brainer to specify the brand,” said W1 Productions operations manager Alan Beck.

W1 Productions had been recommended to the client by a mutual friend, and W1 MD Stuart Turvill put together the design after visiting Alan Lorrimer’s other venue, The Piano Works in Farringdon.

Studio 88 had previously been a basement nightclub that had closed down. “Since it is a basement, the obvious challenges were the low ceiling height,” added Alan Beck. “We had to make it as unobtrusive and flexible as possible. The long rectangular shape of the building, with reflective surfaces and lots of little alcoves coming off it, was another problem we had to contend with.”

In the user-rotatable 80° x 50° constant directivity horn of the XD12, matched with the hugely popular CDD range, W1 Productions found a suitable combination — without needing to set delay taps.

Continued Beck: “From a physical perspective this design fitted perfectly, and the XD12’s provide plenty of ‘grunt’. With the S18s stage left and right, and a third at the rear of the bar, we have achieved uniform distribution throughout the main performance area.

“As for the CDDs, we really like these — for their size they are extremely powerful and a very nice sounding box.”