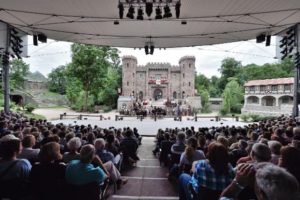 A Yamaha system was installed at a German open air theatre just in time for its 2018 summer season.

Performances at the Volksschauspiele Ötigheim outdoor theatre in Ötigheim, near Karlsruhe, attract up to 100,000 visitors each year.

For the past 15 years a pair of Yamaha 02R digital mixing consoles have been the backbone of the theatre’s audio system. This year, they were replaced with a new system comprising two Yamaha CL5s, an MRX7-D matrix processor, Rio3224-D I/O unit and an RSIO64-D audio/Dante interface, fitted with Yamaha Mini-YGDAI cards for additional inputs and outputs. The system was specified, supplied and installed by Karlsruhe-based Rock Shop GmbH.

“Technology has moved on a long way since the 02Rs were installed in 2003,” said Rock Shop’s Mario Schmidt. “Staying with Yamaha was an obvious choice, because the equipment is so reliable and the workflow is familiar to most engineers. We chose the CL5s because they gave us better features and greater functionality, including Dante, along with excellent sound quality and all the benefits of Dan Dugan automixing.”

Inputs to the system comprise 52 wireless microphone/instrument channels, plus further wired mic and instrument feeds. The Front of House mix is routed to line array PA, while a Yamaha Nuage NIO500-A16 acts as output device for delivering up to 16 analogue wedge and in-ear monitor feeds. Signal distribution is managed by the MRX7-D, which also controls the time alignment for the different PA zones. A four input, eight output analogue broadcast feed is also provided.

“Delivering high quality sound outdoors is always a challenge, but here there is the added difficulty that the performance area is open, but the audience seating is roofed,” added Mario. “Having enough headroom before feedback, weather resistance and wind stability of the speaker system are all challenges to providing a neutral, intelligible, evenly-distributed sound. On top of that, the sound design for different productions needs to be clear, with a straightforward workflow and both home and guest sound engineers need to be accommodated.

“The new system has enabled us to deliver all that, taking advantage of all the most recent developments in Yamaha audio technology to make a big improvement to the quality and distribution of the sound. Volksschauspiele Ötigheim is very happy and all the engineers that are using the system appreciate the workflow and ease of use, as well as the great audio quality.”