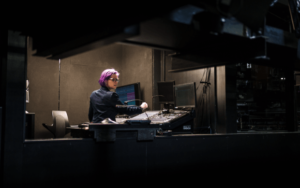 ‘Handling pressure is a huge part of the job’: engineer Liv Nagy on mixing sound for theatre

Over the past few years, Liv Nagy has applied her considerable skills to a multitude of audio engineering applications, resulting in her becoming one of the most exciting young talents in the theatre audio world…

Though her pursuit of a career in audio may not have began in earnest until her late teens, Liv Nagy was, it seems, always destined for a career in engineering. From her formative years growing up in a small town in Hungary, her fascination with hands-on, DIY projects was piqued at an early age.

“My career probably started when my dad taught me to solder cables at the age of 13, and I knew this was something I would love to do later on in my life,” she tells PSNEurope. “I was interested in everything DIY and it always impressed me how my father could fix everything around the house. I’ve always enjoyed crafting and fixing things since I was a little child.”

Yet it wasn’t until the age of 19 that she was even made aware of the possibility of a future in sound engineering. Despite her love of music and technology, she was yet to be introduced to the concept of audio as a career choice. “It seemed impossible for me to do it at the time – I only knew that I loved music and adored technology,” she explains. “I clearly remember the moment that started this ‘crazy’ idea in my mind that I was going to be a sound engineer; I went to a concert and sneaked up to the unattended mixing desk. The sound tech came over and we started chatting. I got to know the whole crew. They knew I could speak English on a fairly good level, so a few weeks later I got a call to see if I was interested in doing admin in English for the company and in return they would teach me sound. I was coiling cables for a bit of course, then they took me on a tour and let me cable the mics up. Then came the day when they let me touch the mics and put them on stands. I’ll never forget how excited I was. And still am.“

PSNEurope editor Daniel Gumble caught up with Nagy to find out more about her route into theatrical audio, why it differs so much to her previous roles in the studio and on the road and why she believes the theatre is a more welcoming place for female engineers…

What was it that attracted you to theatre sound?

In Hungary as a sound professional you don’t necessarily need to specialise like in the UK. You’re very likely to encounter live, studio, theatre and TV/radio broadcast throughout your career. Once a dear colleague rang me and asked if I was available to do a theatre tour of The Taming Of The Shrew as an assistant sound engineer. I didn’t really know what the job entailed, but I said yes without hesitation. I’ve been a frequent theatre-goer since a very young age, thanks to my parents. I’ve always felt theatre was magical and something very special. I was ecstatic to take this opportunity. I loved every minute of it and I felt like I found my place in the wide world of sound.

What projects are you currently working on?

I’ve just finished the run of The Great Wave as a Sound No.1 at the Dorfman Theatre and I’m preparing to do Sound No.2 on The Jungle that is transferring from the West End this June to the Playhouse Theatre. I was involved in this show originally when it was first performed last year. The play tells stories of the refugee crisis and the Calais camp. It is a very touching, eye-opening and valuable play in my opinion and it is an honour to be part of it.

Very much. The equipment is similar but used differently. For example, I mixed live gigs on Digico consoles for quite a few years, but the snapshots puzzled me first when I entered the theatre. The desk is programmed very differently; I had to relearn that, and am still learning. The mic-ing is very different. In live sound the mics are super close to the sound source, while in theatre there are lots of compromises to make. Hair, wigs, costumes, sweat, choreography and occasionally water on stage affect the mic position severely. The aim is to hide the mics to avoid visibility while still achieving good audio quality. It requires a lot of creativity and problem-solving skills, which is my favourite part of it. In theatre the mic-ing is more intimate as well, so it is really important to be a people-person and gain the trust of every actor. The team dynamics are very different to live music. I may have been lucky, but I’ve noticed that in theatre the cast and crew are generally kinder to each other, more patient and more team-minded than in live sound. I don’t know if it’s the intensity and toughness of a production period that brings the team together, as everyone has to rely on each other, or if it’s something else. In live sound there is a team effort of course, but it’s more competitive. That’s what I found, at least.

Tell us about some of the biggest projects you’ve worked on to date.

I’ve worked on a live gig with an audience of 14,000 people. I was the on-stage sound tech of the band. It was absolutely terrifying. Amazing, and one of my favourite memories, but it was very scary to work and solve problems in front of that many people. Especially after a 4am start. My other favourite project was the recording of a movie score in a big studio. I was the assistant engineer but as a result of unforeseen circumstances I had to jump in to record a 100-plus-tracks session alone. I was shaking, but I remember when the orchestra started playing (and finally I felt relieved that everything was working), I actually teared up. It was one of the most beautiful experiences of my life. Theatre-wise it’s hard to decide. My first show as a No.2 in the UK was Saint George And The Dragon in the Olivier Theatre. I loved the cast and the crew and really enjoyed the environment of a bigger theatre. The Great Wave also has a special place in my heart, as that’s my first ever show as a Sound No.1. It was very challenging, but the support I got from my colleagues meant the world to me.

What are the biggest challenges you face as a theatrical sound engineer?

The biggest challenge is always to make it happen, as every single production is different. Sound is not just about getting signal out of the speakers. I had to learn how to use MIDI, OSC and Dante and make phones ring occasionally. There is always something new to figure out and to learn. Also, all the departments have to work closely together and sometimes we get in each other’s way. So the challenge is to find solutions and compromises that make everyone happy. Also, especially when the work gets really intense, there can be frictions within the team. It’s very important to be able to handle it well, get over it until the work gets done and then talk about it. Handling immense pressure is a huge part of the job and it gets harder when you lack sleep due to working hours. It’s very lucky that I love doing my job so much; that’s what gets me through the tough times.

You’ve previsouly mentioned that you found women are more welcomed and accepted in the theatre world, compared to the live industry. Why is that?

I’ve spent 7-8 years in live sound and approximately 2-3 years in theatre. In live sound I encountered bad situations literally every other day. Whenever I turned up at a venue to do a gig, I was always asked if I really was the sound engineer. The security and even the local sound crews would assume I was a fan who just wanted to get in the venue for free or was the girlfriend of a musician. There were many occasions when a situation like this turned into an argument and I had to make calls to get someone to contact the local people to say, Yes, today’s sound engineer is a woman, please let her in. I got many comments like “you should protect yourself from disappointment in the future and choose a more girly job” or “women would never be able to do this as well as men”, “you’ll never be good enough” or even harsher ones. You’d think this doesn’t happen but it still does. These were especially harmful at the beginning of my career. In theatre this has never happened and I find the gender balance to be brilliant across the backstage departments. Maybe because there are actresses in a play and there usually would be women in hair, wigs, make-up and costume departments, it’s naturally accepted that women are around.

What are your favourite pieces of gear to work with?

I love working with QLab, I find programming very exciting. I also trust Focusrite, as it’s easy to install and has been stable throughout all the jobs I’ve done. I prefer using DPA mics and Sennheiser packs, because they just work. I also like the logic of the Digico consoles and the handy colour-coding options; these help me to identify channels quickly. I love when the equipment works; it makes my life easier and I can concentrate on other things.

You are a volunteer for the Inspiring The Future Theatre campaign. Tell us a bit about that.

It is very new to me, but when I heard and read about it, I applied straight away. The campaign gives opportunities to young people to learn about careers in theatres from working professionals. I would have loved this when I was young. In the first years of my career it would have made a big difference if I could talk to other women in the industry and I’d like to be that person for others out there. I really enjoy teaching and talking to young people, I try to take every opportunity to do talks and panels about sound and how I see it. I’d like to make a positive difference in the world.