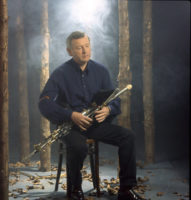 Liam O’Flynn, Ireland’s foremost exponent of the uilleann pipes and arguably its greatest ever master, has died following a long illness, aged 72.

Although known in Ireland for traditional Irish music, notably with the band Planxty, in which he played alongside Christy Moore, Dónal Lunny and Andy Irvine, O’Flynn achieved international acclaim in his career when when he was featured with artists including Kate Bush, Mark Knopfler, Nigel Kennedy, the Everly Brothers, Emmylou Harris, Mike Oldfield, Mary Black, Enya and Sinéad O’Connor.

Born in 1945 in County Kildare, O’Flynn came from a musical family and started taking lessons in the uilleann pipes at the age of 11. Already an award winning piper, in 1972, O’Flynn was a co-founder of the band Planxty which lasted until 1983, bringing a vitality, virtuosity  and energy to Irish traditional music and introducing it to a wider international audience. His post-Planxty album The Piper’s Call was played live at the Royal Albert Hall as part of the 1999 Proms season.