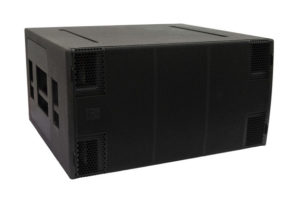 The SXH218 will be a ‘central part’ of the company’s upcoming UK Open Day demos in March at its British headquarters in High Wycombe.

Martin Audio has announced a new subwoofer to its line up with the introduction of SXH218 – a hybrid passive subwoofer with two 4.5” coil 18” drivers.

The product will be a ‘central part’ of the company’s upcoming UK Open Day demos in March at its British headquarters in High Wycombe.

The new subwoofer has been dubbed as the “ideal companion for Martin Audio’s new WPC optimised line array in low end heavy applications or high performance permanent installations such as nightclubs”.

Managing Director Dom Harter continued: “[The SXH218] looks destined to be the fastest selling subwoofer we’ve introduced in some time. We’ve already received significant pre-orders from a key rental partner in the US; it’s already been installed into a new nightclub in Miami, and we’re pretty confident that when we showcase the subwoofer at our UK Open Days in March to our European partners that we will sell out of our initial production runs.”

The subwoofer can achieve a max SPL of 148dB and is powered by either one channel of an iK42 – from the company’s iKON amplifier range – or for full output a bridged pair of channels.