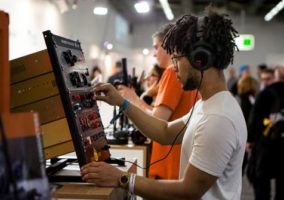 Musikmesse 2018 to group audio, DJ and recording in one hall

Audio, DJ and recording products are going to be grouped in a single location at next year’s Musikmesse in Frankfurt. From 2018, exhibitors who used to be spread over several halls at the two fairs will make their presentations together in Hall 4.1.

The organisers say advantages include shorter walking distances for visitors and ‘…optimum target-group reachability for exhibitors’. Hall 4.1 will be a component part of both Musikmesse and Prolight + Sound and, therefore, integrated into the visitor marketing and information services of both events, from the exhibitor search engine to apps and the official catalogue.
‘The synergies generated by Musikmesse and Prolight + Sound are a decisive factor behind the success of the two events. Bringing together the various parts of the audio, DJ and recording product segment in Hall 4.1 will reinforce these positive effects’, says Michael Biwer, Group Show Director of the ‘Entertainment, Media & Creative Industries’ Business Unit of Messe Frankfurt.
‘The new concept for Hall 4.1 is the result of numerous discussions with companies from the sector.” Many exhibitors, such as Antelope Audio, Audio Precision, Bigger Boat Distribution, Cordial, ES-ProAudio, InEar, Ferrofish, Klotz AIS, Microtech Gefell, Sommer Cable and Warm Audio, have already registered’.
Hall 4.1 will be open from 11 to 14 April 2018 (Wednesday to Saturday), i.e., on all days of Musikmesse. PA gear will remain in Hall 3.1 the organisers say.

The post Musikmesse 2018 to group audio, DJ and recording in one hall appeared first on Music Instrument News.