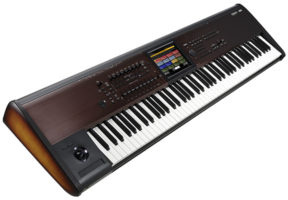 Korg has today announced three new keyboards which will be shown for the first time at next week’s Musikmesse in Frankfurt.

Korg’s Kronos LS Music Workstation features a newly designed light touch keyboard, the mechanism of which has been redesigned so that the velocity is easier to control than on existing light-touch keyboards, even when playing complex chords or difficult phrases, Korg claims. The box-shaped keys share their look with Korg’s premium RH3 action, while providing the faster playing feel of a synth keyboard. Since the keyboard is semi-weighted, it’s also perfect for playing piano and electric piano in any style, the maker says.

Finally, Korg will be showing its SV-1 Metallic Red Stage Vintage Piano. Korg says the crimson body of the 73-key SV-1 left a strong impact when it went on sale in 2009. It has since gone out of production, but in response to user requests has now reappeared in a new red ‘even better looking than the original.’

If all that makes you want to sit down to catch your breath, Korg will also be exhibiting two new piano benches, the PC-770 & PC-550. Both of these feature a deluxe height-adjustable seat with the PC-770 model having wider seating surface. Ideal for use when playing a digital piano or keyboard, they feature a classical design with a seating surface secured by recessed buttons. The four-legged design uses a thicker seating surface than previous units, providing comfortable support even during extended playing sessions. The height can be adjusted continuously by turning the side handle.