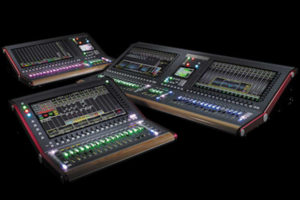 The CDC seven-s and the CDC five are a compact, all-in-one mix solution for small-to-medium sized production companies, freelance mix engineers and all manner of fixed sound installations – with a sub £10K price tag.

The CDC five features a single 23.5” touchscreen and 16 faders, with dual banks of user assignable buttons (40 in total); a unique feature of the CDC five. The CDC ‘human interface’ and feature set combine in aiding the workflow and allowing the engineer creative freedom, unhindered by operation of the technology.

Cadac marketing manager James Godbehear said: “CDC five is designed to appeal to a much wider customer basis – the sub £10,000 console market. It will appeal to multi-purpose venues and house of worship applications, as well as to the corporate, event and touring markets.”

He added that after having launched it at Prolight + Sound and brought it to PLASA Focus in Leeds a month later, industry reaction has been “overwhelmingly positive.”

The 23.5” touchscreen displays the intuitive swipe-able user interface with its instinctive use of gesture operation in navigating and operating the console.

With the launch of the CDC five, comes Version 5 CDC Console Software, which features an improved Graphical User Interface with a completely redesigned console control screen. The new software also boasts a number of new features – including Cue Ripple and Cue Preview – and performance enhancements that feature across the entire CDC range.

Godbehear added: “I can’t think of a better way to mark the occasion of our 50th anniversary than with the launch of CDC five, giving sound engineers a greater opportunity than ever before to access Cadac’s unique user experience and legendary audio performance.”