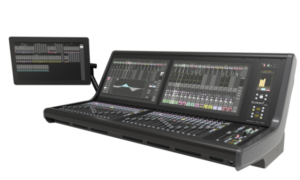 Solid State Logic has announced the global premiere of the 32-fader version of the System T – S300, compact broadcast console.

Solid State Logic has announced the global premiere of the 32-fader version of the System T – S300, compact broadcast console.

S300 is suitable for a wide range of broadcast installations and OB vehicles. The S300 is a fixed layout compact control surface that can be combined with the complete portfolio of SSL’s System T network objects: Consoles, remote tiles, touchscreen interfaces, Tempest Processing Engines, remote PC software and Network I/O.

Said SSL in a statement: “We believe that the S300 is the most powerful, versatile and user-friendly audio console in its class. It offers a compelling combination of extremely powerful features, hugely versatile installation options, and a very attractive price, which make it ideal for mid-scale broadcast and OB applications.”