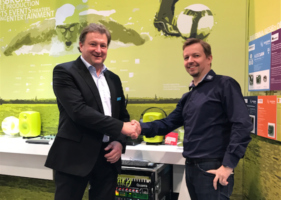 The announcement was made at both NAB and Prolight+Sound

Stage Tec has become the latest manufacturer to join the Ravenna partnership.

Announced at NAB and Prolight+Sound, the Berlin-based manufacturer of professional audio mixing consoles and routers has focused on developing the transition from analogue to digital audio technology in its 25 years of existence.

“With our engagement in Ravenna we are pleased to be able to offer an even wider spectrum of IP solutions to our customers”, explains Helmut Jahne, CEO of Stage Tec. We have been providing IP-based technology since 2012 with the Nexus Dante card XDIP. With the launch of our RIF67 Router Interface in 2017, Stage Tec also offers IP audio transport via AES67. A second interface card to be introduced this year, the Nexus Fiber and IP Interface (XFIP), will also feature full AES67 compatibility. Both cards are also fully Ravenna-compatible.”

Andreas Hildebrand, ALC NetworX, added: “We are delighted by Stage Tec’s decision to join the Ravenna community. Stage Tec has long been a pioneer in the world of digital mixing and routing technology and with their proven Nexus technology, the company is clearly among the premium suppliers of distributed digital routing systems. By adopting AES67 through the implementation of Ravenna, Stage Tec underlines the importance of offering standards-based flexible interfacing options. Using the Ravenna open networking technology will guarantee future-proof operation in the ever-increasing diversity of network-based application requirements.”